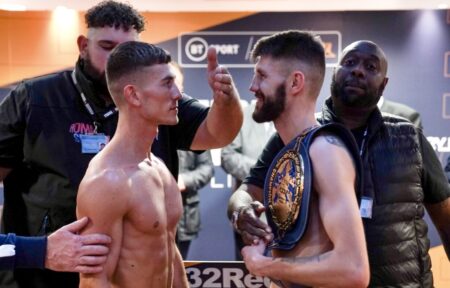 JASON CUNNINGHAM has warned Brad Foster that he will be taken into “deep waters” in their triple title showdown next month.

Cunningham will be risking his European Super-Bantamweight championship, while Foster (14-0-2, 5 KOs) will defend his British and Commonwealth titles in their 12 rounder at Utilita Arena, Birmingham on Saturday October 9, live on BT.
Battle hardened Cunningham (29-6, 6KOs) caused a big upset when he took the European crown from Gamal Yafai in May, winning on points.

The Doncaster man knocked down Yafai three times and says: “There are plenty of positives about Brad, but if there is one thing I have got over him it is definitely experience.

“I just believe that it is my time and it might be a bit soon for Brad. I believe I am going to continue where I left off from Gamal Yafai.

“We haven’t seen Brad in deep waters so we don’t know what he’s like when it is time for a proper gut check.

“There is no doubt that I am his hardest test to date without a shadow of a doubt and we will see what Brad is all about.”

Cunningham, 31, who has also held Commonwealth belts at Bantamweight and Featherweight celebrates ten years as a professional in December.

He has never been beaten at Super-Bantamweight and says: “I’ve done it the hard way and come the old school route. I think I have got that bit of respect that I deserve.

“If I beat Brad I pick up the British title and become a three-weight Commonwealth champion. I don’t think many fighters have won three Commonwealth titles at different weights.

“I’m European champion also so there will only be one place to go. There is a lot riding on this fight for Brad and myself.

“If Brad loses he can have a couple years building back up, I can’t go back to that because I am early thirties.

“The world champions are all good fighters and that is a step above. When I beat Brad that is the only step to go.

“I don’t plan on being in boxing for much longer. I have had a brilliant career, I am doing all right. I want to go for it and get the biggest fights I possibly can.

“I know what I want to make for the rest of my career, but health is wealth and I don’t see myself going on too long in this game.”

In a Midlands derby Nottingham’s Ekow Essuman (15-0, 6 KOs) will make the first defence of his British Welterweight crown when he faces Kingswinford’s Danny Ball (10-0-1, 4 KOs).