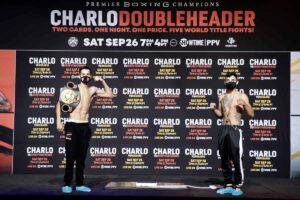 Fight Notes: Time of the stoppage was 1:18 of round ten.

“I felt good tonight. He was a lot tougher than I expected. I was punishing him to the body and head. I had to switch to lefty because of how he was coming in with his head. I didn’t want to risk a head butt so I boxed him differently.

“He was taking a lot of punishment and just trying to jab and survive in the last few rounds. I have to give him credit for being tough. He came to fight and proved he deserves to be in the ring with me. I knew with the pressure I put on, he wasn’t going to last 12 rounds.

“My dad told me to put more pressure in the middle of the fight and that’s what I did. He was holding up and taking my punches. But I knew just a little bit more damage and I could end it.

“I was just focused on boxing him and trying to find an opening, I wasn’t worried about what his corner was doing. At the end of the day, it’s just me and him in the ring. I was just trying to attack him and follow my game plan.

“I expected a little bit more out of myself. I did hurt my hand in the middle rounds, so I wasn’t throwing it too much. I just had to keep working. I knew that he had trouble with lefties, so I was able to find my range from that stance, hit him a lot more and eventually hurt him.

“I knew that I was going to win. We prepared great for this fight after having injuries in my last camp. All the hard work in the gym really paid off tonight.

“This shows that I can fight under pressure, I’m strong and I give exciting fights. That’s what fans want to see. I always leave everything in the ring and that’s what I did tonight.

“I’m ready for anyone, I know I belong with the best fighters in the division. I just want to give fans great fights.”