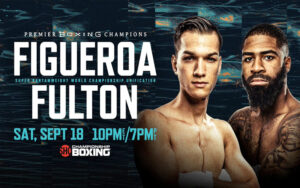 Brandon Figueroa, super bantamweight champion of the World Boxing Council, who triumphed by defeating Luis Nery, is now presented with a new challenge to test and fulfill his skill set.

At 24 years old and with an undefeated record of 22-0-1, Brandon has a puzzle to solve on September 18th, fighting fellow world champion Stephen Fulton Jr.

Brandon Figueroa conquered the WBA title defeating Yonfrez Parejo in the eighth round, on April 20, 2019. On May 15, at Dignity Health Sports Park. Then, he added the WBC world title with one of the best performances of his career by knocking out Mexican Luis Nery in the seventh round.

Fulton won the WBO world title from Angelo Leo on January 23, defeating him by unanimous decision at the Mohegan Sun Casino in Uncasville.

It`ll be televised live on Showtime at a Premier Boxing Champions event, from the Park Theater MGM in Las Vegas.

Tickets for the event promoted by TGB Promotions are on sale now and can be purchased at ticketmaster.com.