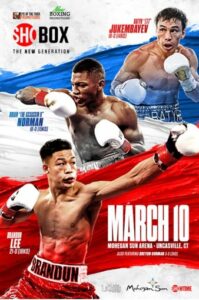 Fight Notes: Teah was down in round3. After beating the count, he was dropped again marking the end of the fight. Time of the stoppage was 1:43 for a Lee stoppage victory.

Fight Notes: White dropped Lopez twice in round 6. Time of the stoppage was 2:40 of the 6th round for a White stoppage victory.

Fight Notes: Padilla was down in round 1. Velasquez was down with the referee stopping the fight at 1:56 of the 5th round. Velasquez was ahead on all judges scorecards at the time of the stoppage.

Fight Notes: Navarro suffered a cut from what was ruled a punch 2:39 into the 6th and final round. In what was a controversial decision, Olguin was declared the winner with just 21 seconds left of the fight. Navarro was ahead on all of the judges scorecards that read 50-45 x2 and 49-46.