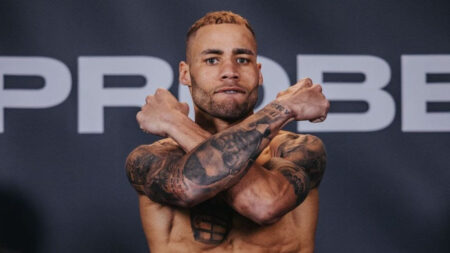 Troy Williamson wants “no excuses” from Josh Kelly after the dust settles on their British title fight.

Williamson puts his super welterweight belt on the line against Kelly in Newcastle on Friday night and has warned his North East rival that he is in “trouble”.

A confident Kelly has predicted he will dethrone ‘Trojan’ by knockout, but Williamson is at a loss as why his challenger believes he can stop him.

Instead, the champion has reiterated his long-held belief that he will wear Kelly down in the second half of the fight, questioning his opponent’s “heart” and resilience.

“All fighters are confident, and he believes in himself, so good luck to him, but I don’t have a clue why he thinks he’s knocking me out!” Williamson told Probellum.com.

“Maybe his mental coach is putting things into his head, and he is believing it.

“I’m just hoping for the best Josh Kelly on Friday night so that there are no excuses.”

“Josh cuts easily and I don’t think he has a huge heart,” he added.

“When it gets deep and tough, I think he will fold under the pressure.  When the going gets tough, Josh Kelly gets himself out of there.

“Twelve rounds is a long time to box and move.  I’m not stupid, I know he is going to be really, really tricky for the first four or five rounds, but once we get past them, then he is in trouble.”

During intense exchanges, when filming a face-off, Kelly said the pressure was all on Williamson, but the title holder dismissed the claims.

“Despite what he says, there is no pressure on me,” Williamson said.

“He’s put pressure on himself by saying he’s going to win by KO.  But let Josh say what he wants because on Friday night, it’ll just be me and him in the ring, and let’s see what he says when he’s being punched in the face.”