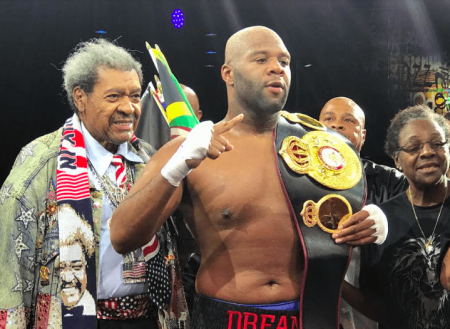 Don King has done it again! After working the phones and finalizing contracts, King proved once again he knows how to put together an action-packed championship night of boxing come Saturday, January 29th in Warren, Ohio at the W.D. Packard Music Hall.

The evening will feature two co-main events as Makabu (28-2 with 25 KOs) of South Africa takes on the number one challenger and fellow countryman, WBC Silver Champion Mchunu (23-5, 13 KOs).   The winner is hopeful of the opportunity to fight World Champion Canelo Alvarez later this year.

The WBA World Heavyweight champion Trevor Bryan (21-0, 15 KOs) of Fort Lauderdale, FL will be featured in the other co-main event as he risks his title against Jonathan Guidry (17-0-2, 10 KOs) of Dulca, Louisiana.

Rumour has it that Daniel Dubois is to face the winner.

And if those two championship fights weren’t enough, King has four other NABA titles on the line for fighters who are knocking on the door of stardom.

The NABA Middleweight Championship will be up for grabs as local product Michael Moore (18-3, 8 KOs) of Cleveland, OH will meet Anthony Lenk (17-7, 7 KOs) of Niagara Falls, NY.

The sixth and final title fight of the night will showcase Cody Wilson (10-3, 7 KOs) of West Virginia, VA and Tre’Sean Wiggins (12-5-3, 6 KOs) of Newburgh, NY battling for the NABA Welterweight championship.

The evening will get rolling with a special Cruiserweight attraction pitting Jaywon Woods (11-1-1, 5 KOs) of Danville, VA challenging Shawn Miller (18-6, 7 KOs) of Troy in an eight-round affair.

The World’s Greatest Promoter, Don King, has come through again with another spectacular championship night of boxing as he returns to Ohio.