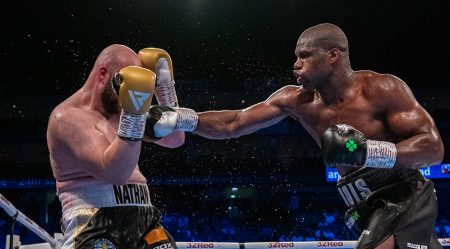 Daniel Dubois is set for a breakthrough year in 2022 with his promoter Frank Warren predicting significant world title action before the new year is out.

Up there with the world’s most explosive heavyweights, Dubois blasted his way back into contention with two bludgeoning victories in 2021 – against Bogdan Dinu and Joe Cusumano – that lasted a combined 5 minutes and 41 seconds. Still just 24, he placed the heavyweight planet on notice that he is back with a bang following his sole setback against fellow Briton Joe Joyce in late 2021 when a severe injury to his left eye forced him to take himself out of the firing line.

Formerly the holder of the WBC Silver, WBO International, Commonwealth and British titles, Dubois secured the WBA Interim world championship in his return fight against the rated Romanian Dinu.

The WBA have since withdrawn Interim belts and Dubois has been formally placed in the No.1 spot to challenge the champion, who is currently the unbeaten American Trevor Bryan.

Dubois is set to return to a British ring in early 2022 after announcing himself to an American audience last August with an appearance against Cusumano in Cleveland on a show headed by Jake Paul that was screened across Showtime PPV in the States.

It represented a big box ticked for the young Londoner who knows that the might of an American audience behind him will only bolster his reputation and earning potential ahead of any forthcoming world title challenges.

“Daniel will be right back in business on one of our first shows of 2022,” reported Hall of Fame promoter Warren. “He has rebuilt this year in a spectacular fashion and is now right in the running for a world title shot in the New Year.

“The WBA is the obvious path for him to go down as he has been installed in the No.1 spot by virtue of him winning the Interim title and a fight against the champion Bryan clearly appeals to us.

“Success against Bryan would put Daniel in position for a shot at the Oleksandr Usyk-Anthony Joshua rematch winner later in 2022.

“So there are some huge fights and nights in the pipeline for Daniel and 2022 will be a defining year for a young man I have always believed is destined for the top.”

Dubois is not alone in occupying the heavyweight attention of his promoter who, of course, is also charged with plotting the fortunes of both Tyson Fury, the No.1 heavyweight in the world, and Joe Joyce, who holds top billing with the WBO.

“We are in an incredible position in heavyweight terms,” added Warren. “Tyson has stated his intention to be very busy across the next 12 months and wants to return to action in March before bidding to become undisputed champion.

“So we’ve got a huge year ahead on the Tyson Fury front. Joe is also in a fantastic position with the WBO and he will be made mandatory at some point in 2022. Big Joe is another we will be looking to keep busy this year and it is unfortunate that injury prevents him heading up our February 12 show that was marked for his return.

“With so much at stake, every fight is a big one for all our heavies across 2022 and, depending on how the titles fall, we could be the home of multiple world heavyweight champions by the end of the year.”