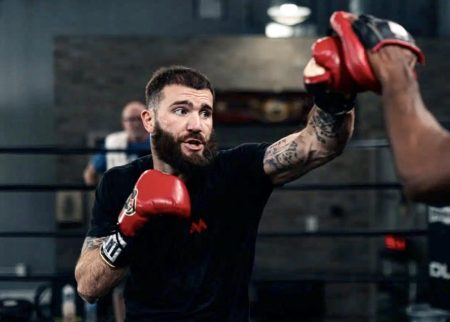 The pay-per-view telecast begins at 9 p.m. ET/6 p.m. PT and is headlined by the return of former WBC Heavyweight World Champion and boxing superstar Deontay “The Bronze Bomber” Wilder taking on top-rated Robert “The Nordic Nightmare” Helenius in a WBC Heavyweight Title Eliminator.

Here is what Plant, and his new trainer Stephen “Breadman” Edwards had to say Tuesday from DLX Boxing in Las Vegas:

“To me, Dirrell was the one who was tense at our press conference. He was getting frustrated and getting loud and couldn’t think of anything to say. What I took away is that I’m on his mind. I feel like I’m living rent-free in his head. He knows he has a top-quality opponent in front of him and someone he can’t mess with. I don’t know where his head’s at, but I know where mine is and I’m ready to rock.

“I’m feeling really good. We’ve been having a great training camp with excellent sparring. It’s been a little bit since I’ve been in the ring, so I’m just excited for the buildup.

“Me and my dad (Richie Plant) brought in a great trainer in ‘Breadman’. I’m just doing a crazy amount of work in the gym sparring top guys. I’m fully-prepared and ready to roll.

“Regardless of who it is in the ring, it’s just somebody who’s in the way of my goals and what I set out to do. If you’re in my way, I take that personally. I’m not just disciplined during camp, I’m working like this year-round.

“I’m just looking to make a statement and put on a big show. I’m coming off the big fight against Canelo Alvarez, and I’ve just been training hard. Ever since that fight, my team has been in the dungeon and we can’t wait for the bell to ring so we can show the world what we’re working on.

“Right now all I’m thinking about is October 15. I wanted the biggest fight that could possibly be made coming off a loss, and this was the name we got. He’s a former two-time champion, so this is the fight that I wanted. After this, I’m looking for the next biggest fight that can be made. Doesn’t matter if it’s Jermall Charlo, David Benavidez or anyone else.

“I feel young and I feel fresh. I’m nowhere close to being done with everything that I want to accomplish in boxing.

“I’m excited to be fighting at Barclays Center for the first time. I know I’ve got fans in that area so I can’t wait to pull up and see what the energy is like. Most importantly, I’m just ready to fight.

“My wife Jordan gave me a pair of Grant gloves that I train with, and for this fight she got our daughter’s name engraved on them, which really helps remind me what I’m fighting for while I’m in the gym training.”

“We’re having a great training camp. Caleb gives you 100% every day. He’s a fast learner, he’s organized and he’s on schedule. I can’t say enough about his work ethic. Now we just need to translate it to the fight.

“Caleb has a big upside and he doesn’t have a lot of wear and tear for a 30-year-old. He’s got a lot of potential and he’s in a stacked division. He’s got a chance to really leave his legacy in the game by coming out on top in some of these marquee matchups.

“This is going to be a really good fight. I have a lot of respect for Anthony Dirrell. He’s a good fighter and a good puncher. I do believe that Caleb has the decided speed advantage and is a little bit of a better athlete. The bad blood makes the fight intriguing, because when guys have personal issues, it tends to make them fight harder. I expect a violent fight with both guys being tested, but I believe Caleb has more advantages.

“I have to give Caleb days off to take his mind off of boxing, because he works so hard and is an intense guy. He goes 100% every workout and that’s a testament to his ability level. When you get the most out of your workouts, you keep progressing and getting better and better.

“I want to take it one fight at a time. What happens in the future is not really my decision. Hopefully we’re going to be successful and I’ll have a long stay with Caleb. I’m definitely not looking past this opponent. Dirrell says he has a lot of animosity for Caleb, so I expect it to be a really hard fight.”