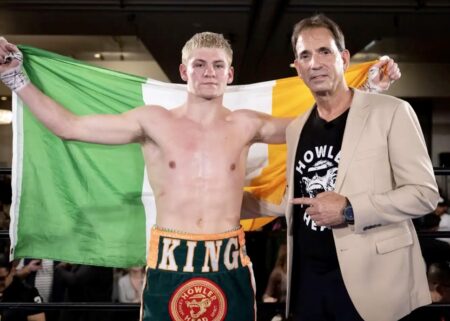 The 21-year-old fast-rising star Walsh, improved to 5-0 with four knockouts, stopping Delen Parsley, (13-2, 4 KOs) in the third round (2:26). Using his full arsenal of power shots, Walsh dropped Parsley in the first and second rounds prior to the knockout victory being declared.

Said the jubilant super welterweight after the victory, “My last fight made me realize I hate going the distance. I’m here to knock people out and to entertain the people. I don’t care who’s next, I’m ready to fight again soon.”

World ranked super welterweight Bohachuk, (21-1, 21 KOs), continued his run of outstanding knockouts stopping Aaron Coley, (16-5-1, 7 KOs) in the second round (1:54). The victory earned the hard-hitting Ukrainian the vacant WBC Continental Americas Title. Bohachuk wore down Coley with his trademark aggressive pressure from the opening bell and proudly displayed the flag of Ukraine in the ring following his win as a tribute to his countrymen affected by the ongoing war.

Local favorite Omar Cande Trinidad, (10-0-1, 8 KOs) continued his impressive winning ways with a second-round stoppage of Jose Edgardo Garcia, (13-3-3, 9 KOs) in a scheduled six-round featherweight fight. Time of the stoppage by referee Thomas Taylor was 1:12 of the second stanza.

Opening the show with fireworks, super flyweight female debuters Gloria Munguilla, (1-0), of Los Angeles, CA and JoAnne Espinoza, (0-1), of Long Beach, CA fought in an action-packed bout over four scheduled rounds. Scores at the end of the bout were for Munguilla by majority decision, 39-37, 39-37 and 38-38.