Cameron clashes with McCaskill for undisputed on November 5 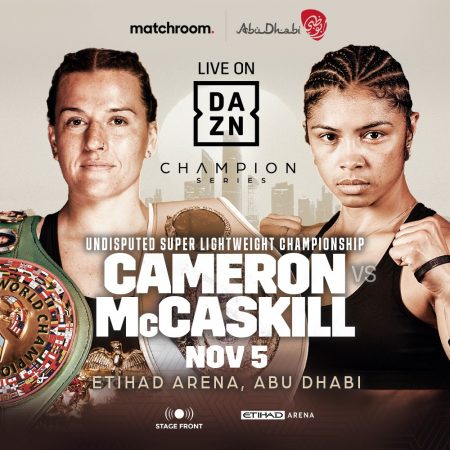 Chantelle Cameron and Jessica McCaskill will clash for the undisputed Super-Lightweight World Title on the undercard of Dmitry Bivol vs. Gilberto Zurdo Ramirez at the at the Etihad Arena in Abu Dhabi, United Arab Emirates on Saturday November 5, live to subscribers worldwide on DAZN (excluding South Korea and MENA).

‘Il Capo’ looked sensational as she stopped Puerto Rico’s Melissa Hernandez in five rounds during the first defence of her crown the following year in her US debut at the Michelob Ultra Arena in Las Vegas.

The 31-year-old added the IBF and inaugural Ring Magazine World Titles to her collection by decisioning Indiana’s Mary McGee in an all-action main event at The O2 in London in October 2021 before defending her titles with another unanimous decision points win over Victoria Noelia Bustos in May this year.

“This fight means everything to me, for me it’s all or nothing,” said Cameron. “It’s a career-defining moment for me – this is what every boxer sets out to achieve when they turn professional. As soon as I became a World Champion, I said that the main goal was to become undisputed. To become undisputed would be my dream come true. It’s what I want to achieve in boxing.

“Jessica is a very dangerous fighter and obviously undisputed at 147lbs. She’s been there and she’s done it. She’s got that crown at 147lbs so it’s definitely going to be my toughest fight to date. I’m expecting her to come out all guns blazing. She’s going to stick in on my chest, but I’ve got a game plan A, game plan B and game plan C.

“I’ll make sure that I box how I want to box and not get caught up in a slugfest. As long as I stay switched on and do what I know I can do then this won’t be a messy fight. It’s going to be a good hard fight, but I know I’m a better all-round fighter.”

“I want to take on the biggest and best fights,” said McCaskill. “I want to dominate in multiple weight classes. It’s too easy to stay in one weight class and play it safe. Now I want to prove myself as the best Super-Lightweight on the planet.”

“This is a career-defining moment for Britain’s Chantelle Cameron – a chance to write her name into the history books and become the undisputed Super-Lightweight World Champion,” said Matchroom Sport Chairman Eddie Hearn. “Chantelle hasn’t put a foot wrong so far in her career but she knows she faces her toughest test to date against Chicago’s brilliant undisputed Welterweight ruler Jessica McCaskill who returns to 140lbs for another shot at greatness. What a card we’re building for November 5 – watch it live around the world on DAZN.”

“Jessica McCaskill has proven she belongs in the Hall of Fame,” said Rick Ramos. “This victory will solidify that. I’m excited for this fight.”