Campbell Hatton makes it 3-0 against Jakub Laskowski in England 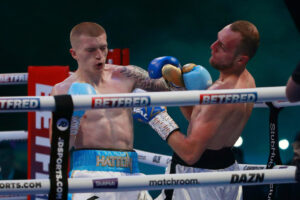 Campbell Hatton extended his unbeaten record to 3-0 with a straight-forward four-round points win over Jakub Laskowski, from Poland.

The 20-year-old Mancunian, son of former double World Champion Ricky, banked more valuable rounds as he continued his development in the professional ranks.

“I was happy again really; I thought my defence was a lot better,” Hatton told Matchroom afterwards. “I was a bit more composed again, I think there were a few times where I’d hurt him and probably could have smothered my work fully and not caught him with anything. I managed to control myself a little when he was going. I didn’t quite get the knockout because I was smothering, and he was tricky, but it was exactly what I need. I need the rounds more than I need a stoppage.

“He was tricky customer, slippery, doing a bit of switching and some different looks. That’s the perfect fight and it has been matched perfectly for me to learn. There are people out there they could bring in and anyone could hit them and knock them over. That’s not how they’re matching me, we’re getting me people who are going to get the rounds out of me and give me different things to overcome – that’s what he did tonight.

“I think I showed some more classy work than I have before, working off my jab. My jab is one of my best shots in the gym and now I’m bringing it into play in the fights now.

“This was a different experience, it’s different to anything that I’m probably going to face very often in my career. It was different making the ring walk this time, you feel breezy seeing people tucking into their tea and having a pint. It was weird making my ring walk to that but as soon as the bell went it was just like any other ring and I just got to work.

“Gibraltar, the amount of media commitments I had to and how much time was invested into me on the media side, I think that set me up, so I’ve not had to do much really. We’ve got it all out the way in the first one, I’m never going to have to deal with anything like that again, the pressure will always be there but each time I’ll be dealing with it better. I’m dealing with the pressure like it’s not there now.

“You see all these opponents, if it was any other kid he was fighting with any other surname, I don’t think he would have been digging in half as much as he did there. They want to make a point, whether it’s to stop me, or just survive – they raise their game a bit when they know it’s me and I’ve got to do the same.”