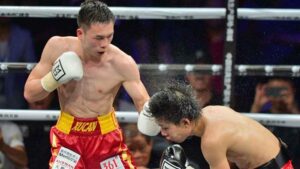 Can Xu vs. Leigh Wood

Matchroom Fight Camp, in the city of Brentwood, England 31/7/21

Chinese boxer Can Xu, World Boxing Association (WBA) Featherweight champion, will defend his title next Saturday against British champion Leigh Wood. The bout will be the main event of the evening at the Matchroom Fight Camp, in the city of Brentwood, England.

Better known in the ring as “The Monster”, Xu, with a record of 18-2, 3 KOs, has not fought in an official bout since November 2019, when he defended his title for the second time against American Manny Robles III, whom he defeated in a resounding manner in 12 rounds with unanimous decision on American soil; this fight would be the first defeat in Robles’ career. Xu threw 1,562 punches during the fight, an impressive amount.

It is worth noting that COVID-19 pandemic forced Xu to postpone several important fights, as was the case of the unification fight against Josh Warrington (30-1, 7 KOs). Again, this bout failed to materialize when the English boxer suffered the first loss of his professional career to Mexico’s Mauricio Lara in London in February, losing his chance to challenge for the WBA Featherweight belt.

Also, in April, Xu’s agency found him a replacement in American fighter Emilio Sanchez (18-1, 11 KOs), with the fight scheduled for June 13th in Los Angeles, California; however, broadcast timing issues prevented the bout from taking place, prolonging Xu’s absence from the ring for a few more months.

After repeated unsuccessful attempts to defend his belt, the fight was arranged against Wood (24-2, 14 KOs), who had rebounded from his recent second loss to Jazza Dickens by knocking out the then undefeated Reece Mound last February.

The Chinese fighter had to change his training approach with Sanchez’s high-volume attacking style to adapt to Wood’s finesse and patience. The Jiangxi native has been training intensively in Miami, Florida, with his Cuban trainer Pedro Diaz since March. “The preparation in these months is by far the best I’ve had for my title fights, I feel in an excellent level both physically and mentally. Wood is a great fighter and a difficult opponent to face, he also has the advantage of fighting at home. I will put all my effort to keep my title,” said Can Xu.

For his part, the British fighter is very confident and determined that the world title will stay at home. “Opportunities like this don’t always come along, but I won’t need another one,” Wood said. “I will be World Champion. He (Xu) is a great fighter, if you let him fight his style it will be a very tough fight, I know what I have to do and I will make the necessary adjustments”, concluded the Englishman.

Both fighters are a guarantee of entertainment for the public in a highly competitive division, and their bout, which will be broadcast on DAZN, promises to be fierce and entertaining.