“Canelo” Alvarez is The WBA Boxer of The Month 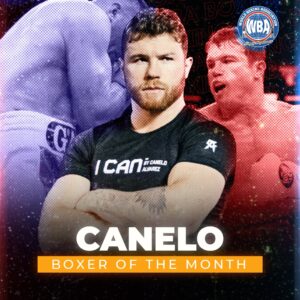 The World Boxing Association (WBA) published its February rankings with all the corresponding changes and also its monthly honors with Saul Alvarez as the Boxer of the Month, while Vic Saludar won the Honorable Mention.

“Canelo” closed February on a high note by defeating Avni Yildirim on Saturday at the Hard Rock Stadium in Miami. The Mexican dominated the fight from the start until the end of round three, when the Turkish fighter’s corner decided not to come out for the fourth round to give Alvarez the victory and fulfill the first defense of his WBA 168 lbs. Super Championship.

Alvarez also retained his WBC belt and will now take a very short break to get back in the gym and prepare for his May 8th showdown against WBO champion Billy Joe Saunders.

The other awardee of the pioneer body, Filipino Victorio Saludar, won the minimumweight title by defeating his fellow Filipino Robert Paradero on February 20th, in Biñan City. The 30-year-old fighter won a split decision over a younger opponent to prove that he is still one of the biggest names in the division.

In addition to the awards, all the ranking lists for February were published on the official WBA website and can be found in detail in the corresponding section.

Claressa Shields vs. Marie-Eve Dicaire This Friday on Pay-Per-View WBA Will Broadcast Live Boxing on YouTube From Argentina on March 6th