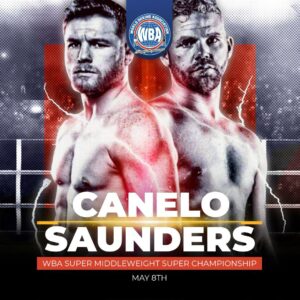 Saul “Canelo” Alvarez and Billy Joe Saunders held an online press conference on Wednesday with a little less than three weeks to go before their fight for the World Boxing Association (WBA) Super Middleweight Super Championship, as well as the WBC and WBO versions.

The fight will take place on May 8th at the AT&T Stadium in Texas, home of the Dallas Cowboys, and is expected to be a great showdown between two of the best fighters in the division today.

“The truth is that making history is something very important for us, and these fights are important for what we want to achieve in boxing,” Alvarez said in his conversation with promoter Eddie Hearn through Matchroom Boxing’s YouTube channel.

About his opponent, Canelo highlighted his strengths and said he needs to beat him to take another step forward in his career.

“I know what Saunders has. He’s a fast fighter, a fighter that moves, he’s southpaw and tough. But at these levels I have to adapt to any style,” the Mexican assured.

“I’m going to win, no doubt. I’m training at 100 percent. I’m going to win and that’s the only thing going through my head,” continued the Guadalajara native.

Fort his part, Saunders spoke about Canelo and the significance of this bout as the biggest fight of his career so far.

“I respect every fighter that gets in the ring. I don’t put myself beneath or on top of anyone. It’s a legacy fight because of what is on the line,” he said.

With just a few weeks left before the showdown, the fight is heating up and a massive presence of fans is expected in the arena for an event that promises to be unforgettable.