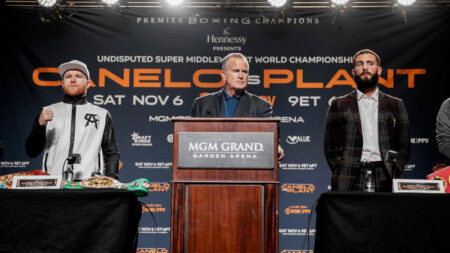 This what the fighters mentioned prior their historic clash of this weekend:

“I want to thank everyone for their support and for making this fight possible. We have come a long way in our career to make this happen. Now we’re just days away from making history.

“It’s so different when you’re in the ring, so I don’t really take anything from our altercation at the first press conference.

“I’ve faced many good fighters with skills that are similar to Caleb. It’s a style that I’ve seen before and I know what to do with it. That just gives me confidence in my experience heading into this fight.

“I always train 100% my hardest and for the style of my opponent. I like that idea that Caleb is coming in believing he will win this fight. It’s going to make it more exciting for the fans.

“The goal is to be an all-time great. I’m so proud of the journey I’ve taken to achieve that. I’m not going to stop until I’ve tried my best to reach that goal.

“Only one thing is going through my mind, and that’s winning. Everything else is outside of my control. I only care about what’s going to happen inside of the ring Saturday night.

“The fact that I can make history this weekend along with Formula One driver Sergio ‘Checo’ Perez, is very motivating for me. My goal is to make this an unbelievable weekend for Mexico.

“My emotions are under control. I’m excited for the fight of course. I’m excited to become undisputed champion and to make history. That’s what I want. But I can remain calm, because this is what I do.

“Only five male fighters in the history of boxing have accomplished becoming undisputed champion. I want to be the sixth. That’s the only thing on my mind.

“Make sure you tune-in Saturday night. You’re going to see the first undisputed super middleweight champion ever in this sport. This is history and you’re looking at him. His name is Caleb Plant.

“It wasn’t my intention to get under Canelo’s skin at the first press conference. I think the media makes more of it than we do. We’ve both been in worse scuffles than that. When the bell rings, it’s completely different.

“I’m someone who likes to focus on what’s in front of me. Until recently, Canelo wasn’t in my weight division, so I didn’t think much about fighting him. Once he came in the division, I knew that it would be a huge mega fight and here we are.

“The way I see this fight turning out is, Jimmy Lennon Jr. saying ‘the new undisputed and still undefeated’. Canelo’s had multiple close fights, but I believe the right people are in place to make the right decision Saturday night. All I can focus on is the game plan and the job that needs to be done.

“People are going to say what they’re going to say. But I get the final say and I can’t wait to prove everything in the ring. I can’t focus on what other people say about me. If I listened to the doubters, I wouldn’t even be here.

“I’ve been the underdog before. It’s a place I like to be. I like people rooting against me. It gives me extra motivation, but when you’re fighting for undisputed status, you don’t need much more motivation than that.

“Make sure you tune-in. This isn’t just the biggest fight of the year, but you’re tuning in to witness history when I get crowned the undisputed super middleweight champion.”

“This has been a great training camp. We’ve had a great career so far, and this is a cherry on top of everything we’ve done so far.

“We have fought so many different kinds of champions. There is not much left to say about Canelo’s career. On Saturday, everyone is going to witness the first ever Mexican undisputed world champion.

“We respect and admire Caleb Plant’s work ethic. But in the end, we’re better and we’re going to show it Saturday night. The goal is to be at the top.

“I don’t focus on the opponent. I focus on what my fighter will be able to do. We had an amazing camp and we’re going to be ready to roll on Saturday night.”

“I want to thank all the members of our team that are with us day in and day out. We have the best team in boxing. Every member is great at what they do.

“Saying that we had the best training camp ever is cliché, but I’m about to say it again. Every camp we’ve had has been great for different reasons. This training camp had challenges, but it’s been the best one this team has had.

“Just know that no stone has been left unturned. All the work has been put in. We’ve gone above and beyond to prepare for this fight. You’ll never see a better version of Caleb than you will Saturday.

“We still have 12 rounds of boxing to put in. At the end of those 12 rounds, I have no doubt whose hand will be raised. It will be Caleb Plant, the first undisputed super middleweight champion in boxing history.

“Any time you face the pound-for-pound best in boxing, you know you’re going to have your work cut out for you. We’ve had our work cut out before and overcame it. We’ve really prepared our whole career for this fight.”