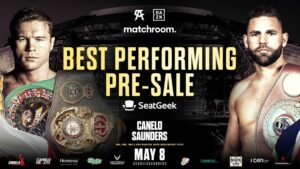 All remaining tickets go on general sale today for the blockbuster unification showdown between Canelo Alvarez and Billy Joe Saunders on Saturday May 8 at AT&T stadium in Arlington, TX, live worldwide on DAZN, after the event broke SeatGeek.com’s pre-sale record.

Over 40,000 tickets were sold in the pre-sale period, smashing the previous record for the best performing pre-sale sales for the mobile ticket platform, and the scramble for the remaining tickets will begin at 10am CT today (11am ET) when the rest of the tickets are released on general sale.

Canelo fights at the home of the Dallas Cowboys for the second time in his career and returns to his traditional Cinco De Mayo weekend date after COVID robbed him of that in 2020.

The Mexican superstar is aiming to take a massive step to becoming the first 168lb undisputed champion from his homeland and the stakes couldn’t be higher, as if he hands Saunders a first career defeat and takes his WBO crown, just one piece of the puzzle will remain.

Saunders, who will be completing his training camp in Las Vegas, will be looking to stop the rot for British fighters facing Canelo and grab the biggest win of his career to date against the 30 year old – and promoter Eddie Hearn says the pre-sale success reflects the appetite for fight fans to see Canelo and Saunders tangle on Cinco De Mayo weekend.

“The pre-sale numbers were fantastic, and I am sure that on Cinco de Mayo weekend, we’re going to have a full house to watch this massive unification fight,” said Hearn.

“It’s great to be able to stage a fight of such huge global significance to the home of the Dallas Cowboys and fill that wonderful stadium with fans. We’re going to be putting on a night that those lucky enough to be in there will never forget.”