Canelo vs. Yildirim – Miami Will Savour Boxing This Weekend! 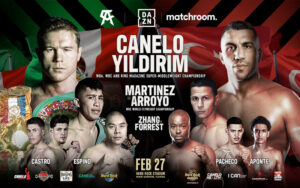 This Saturday the Hard Rock Stadium in Miami, Florida, will be the scene of an extravaganza, which promises to be a war involving WBC super middleweight champion Saúl “Canelo” Álvarez, who defends his crown against Turkish Avni Yildirim, as well as the defence of flyweight champion Julio César Martínez, against Puerto Rican McWilliams Arroyo.

For WBC President Mauricio Sulaimán, this card shows that boxing is on firmly back on its feet and that soon the arenas and stadiums will once again be full of fans who will enjoy the thrills of sport.

Excited to think that the Hard Rock Stadium in Miami, Florida will be graced with the presence of 15 thousand spectators, he assured that fights like the ones we will enjoy on Saturday deserve the warmth and enthusiasm of fans.

For Mauricio Sulaimán, this card has captured everyone’s attention, as Saúl is a champion that people always want to see and who delights the public with great fights where he shows skills, dedication and power.

He mentioned that just this morning he spoke with Avni, who reaches this commitment with a record of 21 wins, 12 of them by knockout and who vows that he comes with everything to win.

He also commented that the fight between Rey Martínez and McWilliams Arroyo is a boxing classic, as it reminds us of the great rivalry between Mexico and Puerto Rico. He said that Rey Martinez is the new Rubén Olivares and that his story still has many chapters to come. But at the self same time, it`s necessary to appreciate the silky skills that Arroyo brings, as he is an extremely experienced fighter who will not easily let go of the opportunity to conquer the Green and Gold Belt.