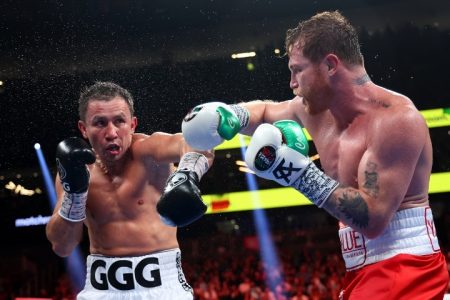 For the first cautious two rounds, Golovkin cautiously measured Canelo with a steady left jabs. In round two Canelo landed a stiffer left jab and a right to the head, which saw him up the pace, something in which Golovkin failed to do until the final three rounds.

In the third, Canelo started targeting the body and then to the head which proved effective throughout. Gennady`s forehead already sported a red welt and his cheeks were red, repeatedly being caught with left counters. Towards the end of the fifth a left set up Golovkin and a huge right to he forehead appeared to shake him.

At the halfway point Golovkin was using his jab but it lacked pep, while Canelo was hunting him down to inflict hurt. Suddenly a sharp right to the head from Golovkin, but there was a price to pay as he got a counter left to the body, but then a crisp right uppercut from Golovkin which he failed to follow up.

Heavy exchanges in the ninth, which was the best round of the fight as both were uploading at the same time. Combinations to the head from Canelo and a big right uppercut, with Golovkin responding, in a space which would have made a telephone booth cavernous. The offense continued in round ten and then a clash of heads just before the bell.

A tap of gloves in mutual respect in round eleven, which was the prelude to both opening up. A booming right uppercut from Canelo found the mark, answered by jabs and combinations from Golovkin. A grandstand finish, but several clinches as both had expended a lot, in a more strategic fight than their first two battles.