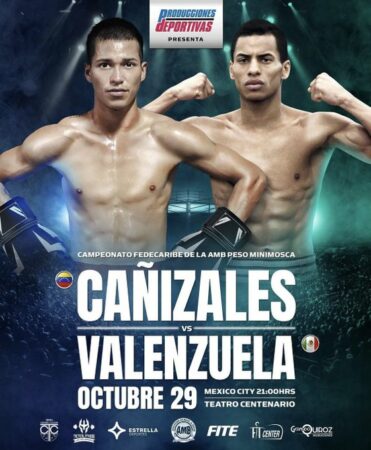 Former World Boxing Association (WBA) world champion Carlos Cañizales has plans to return to the top and it starts in the same place where he lost his crown to Esteban Bermudez in May. Mexico City, will host his comeback against German Valenzuela for the WBA Fedecaribe belt.

The Teatro Centenario is the venue chosen by the promoter Producciones Deportivas for them to fight for the WBA Light Flyweight Fedecaribe belt.

For “CCC”, who is 28 years old, it was a painful and surprising knockout against Bermudez, which caused him to lose the title. However, Venezuelan’s motivation is still there and he knows he must take it easy to return to the rankings that once belonged to him. Winning the WBA regional belt would be a great start on his road back.

Valenzuela is a very dangerous opponent who will try to take advantage of being at home to win and to be on the boxing world map. He is just 22 years old and has fought between minimum and super flyweight, but he has settled the Light Flyweight division. He has won three of his last four fights and won by knockout in his most recent fight in August.