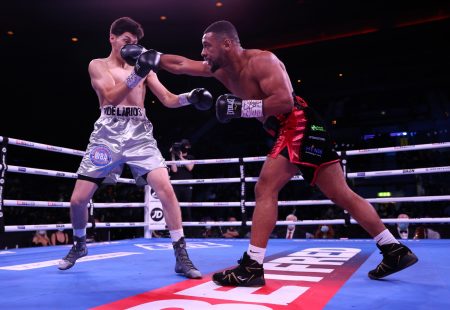 The Briton won his first professional championship in a great evening. The 25-year-old fighter showed great strength and left a great impression to start making noise in the division.

Agyarko came out with an aggressive style, he used his jab well to open his opponent’s guard and was able to make good combinations with power shots to overwhelm Larios, who was trying to maintain distance and impose his height advantage, but it was impossible for him against the attack.

In the ninth round, he landed a left hook that left his rival unstable, who stayed on the ropes. Agyarko punched him there until the referee intervened and stopped the fight.

The London native remains undefeated in 10 fights, 7 of them won by KO, while Larios lost his immaculate record and now has 14 wins, and 1 loss.