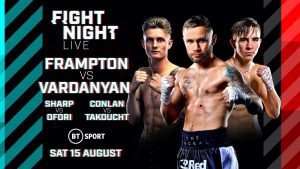 Carl Frampton is seeking a new opponent for his upcoming fight as Vahram Vardanyan has withdrawn from their clash scheduled for August 15 at BT Sport’s Studio in London. Vardanyan (21-1-1, 14 KOs) pulled out of the Frampton fight due to visa issues that will prevent him from entering the UK.

“It is what it is. I feel like I’m a pretty positive person. These things are out of my control. I just have to deal with it, and that’s what I intend to do. I still don’t know who I will be fighting. I’m sure they will get an opponent for me for the 15th, but at this point in time I’m not sure who it’s gonna be and I’m sure which weight it’s gonna be. I imagine an opponent coming in at a week’s notice is not gonna be able to make 130 [pounds].”