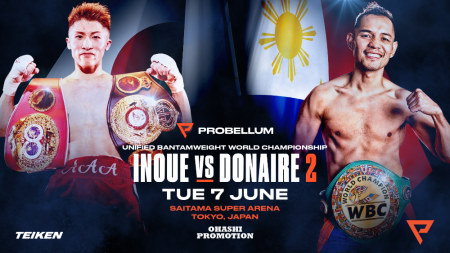 Former two-weight world champion Carl Frampton believes a “shock” could be in store for the rematch between Nonito Donaire and Naoya Inoue.

Frampton defeated Donaire in 2018 and says it is remarkable that the Filipino Flash remains at the top of the sport, on his 40th year.

The Irish boxing legend calls his former opponent, and now friend, the “Benjamin Button of Boxing”.

Frampton says Inoue carries formidable power, but he is backing Donaire to take the Japanese star’s best shots and retaliate in a fight that could send shockwaves through the sport on June 7.

“Inoue is a great fighter and one of the keys for Nonito is to stay with him and to be able to take a bit of punishment,” Frampton told Probellum.com

“Inoue has got serious power, but Donaire has got a good chin and he has the ability to take shots and fire back.

“I would not be surprised if there was a shock on the cards in Japan.  From the first fight, if anyone is going to have learnt and made the adjustments, then it’s Nonito.  He’s been around this game a long, long time.”

The first contest went down as the Fight of the Year after a dramatic battle over 12 rounds, won by the Inoue.

But Donaire has talked with confidence throughout the build-up to their rematch and Frampton is predicting yet another classic contest.

“It’s unbelievable that he is still fighting at the very highest level at 39-years-old,” he said.

“He is the Benjamin Button of Boxing.  It feels disrespectful to say Nonito is getting better with age, because he’s been a great fighter for a long time, but he has been able to maintain world class quality for a long time.   People were saying he was too old ahead of the first fight with Inoue in 2019!

“Ahead of that first fight, I was telling people that Nonito would give Inoue a fight and that it would be close.

“People just thought I was saying it because we’ve become friends, but I always give my honest opinion about any fight.”

Frampton defeated Donaire on points in Belfast in 2018 but recalls how his comfortable lead was met with a rude awakening in round 11.

“He nailed me in the 11th round and even though I had a big enough lead, I had to go into the final round saying to myself: ‘Just be safe’.

“And so, I know from experience, that Nonito is always dangerous, and I am really looking forward to this fight.  It is going to be a cracking fight and it highlights the quality in the lower divisions.”