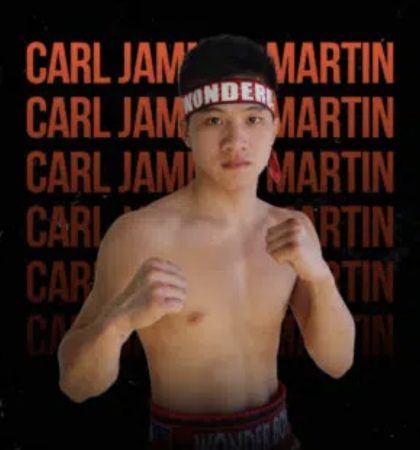 The exciting ‘Wonderboy’ returns to action on Saturday night when faces Charles Tondo in Manila, with his WBA Asia title on the line.

Martin, unbeaten in 19 fights, believes a meeting with the 12-0 Goodman, at the end of next year, could be built into a “major headliner” with both men already well placed in the world rankings.

The Filipino fighter, who joined Probellum in March, is joined in the WBA rankings by stable-mates Lee McGregor, Shabaz Masoud and Jack Bateson, but says his plan is to fight the Goodman first.

“I’m not afraid of anyone and that includes fighting boxers within our stable,” Martin told Probellum.com

“But if there’s a dream fight for me right now, it’s got to be Sam Goodman. Give us two or three fights to market that fight, I honestly believe me, and Goodman would serve as a very interesting major headliner in one of Probellum’s cards late next year.”

Martin’s debut fight under the Probellum banner ended in a thrilling 11th round KO of Ronnie Baldonado, after he had been sent to the canvas early in the contest.

“His aggressiveness made me too eager, and it made me realise that being too eager would lead to crucial mistakes as evidenced by the knockdown I suffered against Baldonado,” the 23-year-old said.

“I intend to correct for my next fight.”