Carlos Adames vs. Alexis Salazar added to Tank vs. Barrios this Saturday 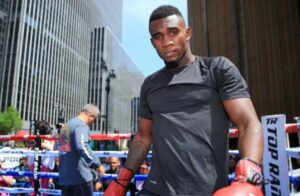 Super welterweight contender Carlos Adames will take on Mexico’s Alexis Salazar in a 10-round showdown on the SHOWTIME PPV undercard this Saturday, June 26 from the award-winning State Farm Arena in Atlanta in an event presented by Premier Boxing Champions.

Adames vs. Salazar replaces the previously scheduled Julian Williams vs. Brian Mendoza fight, after Williams was forced to withdraw because of an elbow injury.

The event is headlined by four-time world champion Gervonta “Tank” Davis as he seeks a title in a third weight class against unbeaten WBA Super Lightweight Champion Mario “El Azteca” Barrios in the main event of a SHOWTIME PPV telecast that begins at 9 p.m. ET/6 p.m. PT.

Tickets for the live event at State Farm Arena, which is promoted by Mayweather Promotions, GTD Promotions and TGB Promotions, are on sale now and can be purchased at https://www.ticketmaster.com.

A native of Comendador, Dominican Republic, Adames (19-1, 15 KOs) fights out of New York City as he seeks to earn a second shot at a world championship. The 27-year-old defeated a slew of contenders on his way to a 2019 title shot that he lost by narrow decision to Patrick Teixeira. Adames defeated former champion Carlos Molina, and contenders Frank Galarza, Joshua Conley and Alejandro Barrera to earn that opportunity at a title.

The 25-year-old Salazar (23-3, 9 KOs) rides a 15-fight winning streak into this matchup. Most recently, Salazar earned a unanimous decision over Ruben Barajas in their December 2020 clash. Originally from Guadalajara, Jalisco, Mexico and now fighting out of Norwalk, Calif., Salazar will fight in the U.S. for the sixth time Saturday night. His previous stateside outing saw him dominate Abraham Cordero to earn a unanimous decision in May 2019.