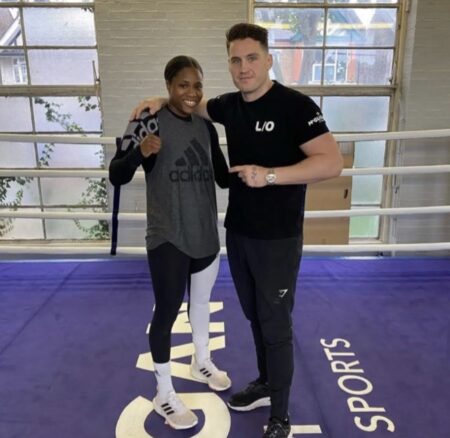 Caroline Dubois (20), widely regarded as one of the hottest prospects in women’s boxing, has announced she will be trained and managed by Shane McGuigan as she looks to take the pro ranks by storm.

Shane McGuigan: “At just 20 years old, I firmly believe Caroline Dubois is already among the top female boxers in the UK. She was one of the most in-demand fighters to come out of the Olympics and I am delighted she’s chosen me to guide her pro career as both her coach and manager. We now look forward to her making a spectacular pro debut next month.”

Caroline Dubois: “I’m really excited to be working alongside Shane McGuigan and Oli Ward from First Access Sports as I begin my professional career. I have big ambitions for myself in boxing and I couldn’t have wished to have a better team behind me. Roll on 20th November.”

One of 11 children, and younger sister of heavyweight Daniel Dubois, Caroline started boxing at the tender age of 9 out of renowned amateur gym, Repton Amateur Boxing Club. She has been Youth Olympic champion, World Youth champion and four-time European Youth champion.

Beginning her transition from undefeated junior champion into senior bouts, Dubois qualified for the 2020 Summer Olympics at the 2020 European Boxing Olympic Qualification Tournament. Here she took home the silver following her first loss to Kellie Harrington on a split-decision. Tokyo 2020 saw Caroline defeated by Thailand’s Sudoporn Seesondee in the quarter-finals. 9 years separated them by age and 1 point in defeat.

Caroline Dubois has already gained attention out of the ring for her exceptional achievements. She was named SportAid One-To-Watch in 2018 and named BBC Young Sports Personality of the Year in 2019.