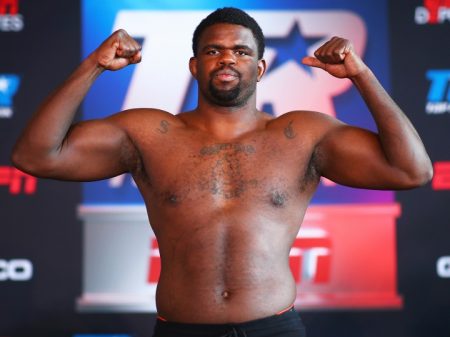 Like any professional fighter, heavyweight Cassius Chaney would love to retire with enough money to secure a comfortable future for himself and his family.

Money, however, isn’t the only motivating factor whenever the hulking, 6-foot-6 slugger from New London, CT, steps through the ropes.

As the newest acquisition to the CES Boxing roster, Chaney still dreams of making it to the top of the mountain in professional boxing, and he’s awfully close; at 21-1 with 14 knockouts, the 35-year-old Chaney finds himself ranked among the top 15 heavyweights in the United States, right on the precipice of a major opportunity before the end of 2022.

With a new team in his corner, Chaney is confident the best is yet to come, and the new journey – perhaps the second half of his career, if you will – begins Saturday, August 20 when he headlines CES’ Summer Heat event at Mohegan Sun Arena in a 10-round showdown against Troy, NY, veteran Shawn Miller.

“Winning a world title is the only reason I stay in this,” said Chaney, who recently inked a long-term promotional deal with promoter Jimmy Burchfield Sr. after previously spending his entire career with Main Events.

“One of the things I can honestly do in life and be completely happy with is to go work with and help kids who are less fortunate – kids who need guidance and mentorship. That makes me just as happy as winning a fight. For me to continue boxing and to want to strive to be better each day, I have to have a team I’m comfortable with. That’s what’s most important.

“What I’ve always noticed about Jimmy is he is really into promoting his fighter. He will get out there and promote like other guys who are half his age. That’s something I’ve always respected, and I saw it as something I needed at this point in my career.”

Summer Heat kicks off at 7 pm ET. Tickets are available online at CESFights.com, MoheganSun.com, or through the Mohegan Sun box office. August 20 marks CES’ first show at Mohegan Sun Arena since October of 2015, renewing a long-standing partnership between the region’s top combat sports promotion and one of the world’s foremost entertainment venues.

Another item on Chaney’s bucket list was headlining at Mohegan, which he’ll finally be able to do on August 20. A gifted athlete his entire life, Chaney moved from his hometown of Baltimore to nearby Old Saybrook as a teenager to live with his grandmother. Growing up with three brothers, life at home was always competitive, and Chaney eventually went on to play Division II basketball for the University of New Haven, where he earned the East Coast Conference (ECC) Rookie of the Year Award in 2007 in addition to All-Conference honors each of his final three seasons.

A late bloomer by boxing standards, Chaney never envisioned himself stepping into the ring until watching re-runs of old fights on ESPN, particularly heavyweight Lennox Lewis. Chaney thought to himself, “I can do this.” His basketball coaches believed, too, and helped him transition from the hardwood to the squared circle.

At 28, Chaney made his professional debut and eventually won his first 21 fights. 28 fights. In 2019, he made headlines on ESPN’s Friday Night Fights with a sensational win over Joel Caudle, knocking his opponent out of the ring in the first round of their scheduled eight-round showdown. Later that year, he captured the vacant WBC USNBC Silver heavyweight title with a knockout win over Nick Jones. The only blemish on Chaney’s record is a close, split-decision loss to undefeated George Arias, an opportunity Chaney remains thankful for.

“I had to take that chance. I had to take that risk,” Chaney said. “I honestly believed going in that there was no way he could hurt me. I didn’t get the outcome I wanted, but a lot of positives came from it and I’m moving forward with my career.”

One of those positives is the opportunity fight under the guidance of CES and headline a fight card in his neck of the woods, which might not have happened had he won the Arias fight. While a victory that night could’ve taken his career to new heights, Chaney reiterates that he doesn’t do this solely for money. With money comes a lot of new faces in his inner circle, and Chaney is careful about who lets on the inside. That’s part of the reason why after launching an Amateur Athletic Union (AAU) basketball clinic for area youth over the summer, he felt the need to step back a bit as the demand for “access” increased.

“You can make a lot of money in this sport, but do the people creating those opportunities for you have your best interests in mind? I don’t want to be out there fighting my ass off for people who aren’t looking out for me,” Chaney said. “If my team has my back and no matter the outcome we’re still a team at the end of the day, I’ll fight anybody. Boxing can’t just be about making money.

“I need the right team behind me, a team that will look at what you need to succeed and make sure you have it so you can go into any fight with all the confidence in the world. I feel I have that now. Jimmy has always been good to me, even when I wasn’t with CES, and that alone is different.”

The August 20 event also features a special book signing by Hall of Famer promoter and author J Russell Peltz, who is selling and signing copies of his recently-published memoir Thirty Dollars and a Cut Eye, which was named the 2021 Book of the Year by the West Coast Boxing Hall of Fame.