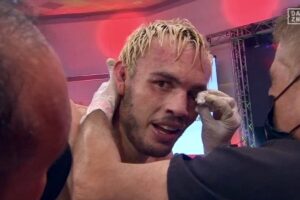 Fight Notes: Cazares, unbeaten and the underdog was deducted a point for a headbutt in round two. There was controversy about the cut on Julio Jr’s eyebrow. The bout was stopped in round six due to a cut over Chavez’ left eye. Scores were 57-56, 59-54, 57-56 with the bout made at light heavyweight.

“Julio says that it was a headbutt. In reality, it was an uppercut that caused the gash on his eye,” stated Cazares. “I first landed the right hand and then the uppercut.

“More importantly, I knew that this was my big opportunity and I couldn’t pass it by. The result is due to discipline, hard work, and a great, solid team. I respect Julio Jr. He’s a very humble man and I offer my friendship. If I can do something for him, I will gladly do it.”