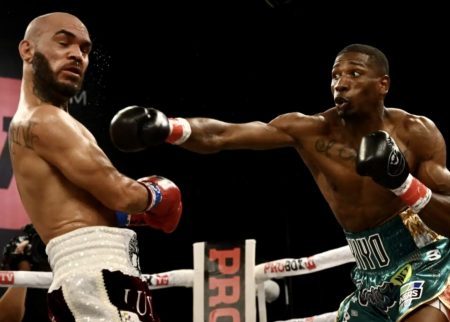 “It was a great fight,” said Cesar Francis. “He made me think a lot. He’s very crafty. There’s a reason why he was a world champion. I know that I have great power, but I just have to let my hands go. I’ll look back at the tape and get better from this because I need to work on finishing my opponents. We’re going to keep working and keeping getting better and work on getting a world title.”

· Dominic Valle (4-0, 4 KOs) of Lutz, Florida won via knockout at 2:39 of the fifth round against a very aggressive warrior in Manuel Guzman (8-6-1, 5 KOs) of Managua, Nicaragua in a super featherweight battle.

· Brandon Glanton (16-0, 13 KOs) of Atlanta, Georgia defeated Deshon Webster (12-6-3, 6 KOs) of Lenxa, Kansas via knockout in a cruiserweight bout. After scoring two knockdowns earlier in the fight, Glanton ended matters at 1:58 of the fifth with a fight-finishing flurry.