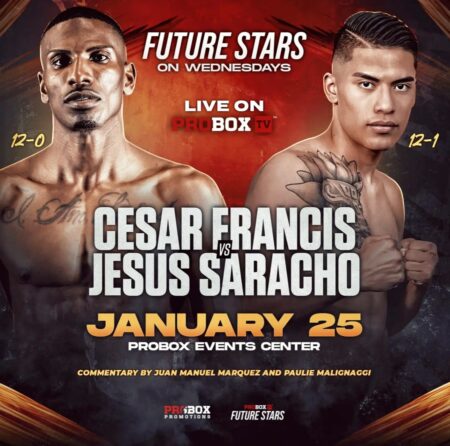 Francis is coming off the back of a breakout year in 2022, featuring consistently on ProBox TV, defeating former world champions Mohammed Mimoune, Raymundo Beltran whilst also producing a KO of the Year contender against Francisco Armenta.

Francis discussed his 2022 and his hopes for 2023. The Panamanian-born stylist stated, “I enjoyed 2022, I was active consistently for the first time in my career, so I have to thank my team at ProBox TV and of course my team who have been together for years for all playing their part in making it the best year of my career.

“I’m not young, but I’m in my prime, I’ve made up for lost time and now it’s all systems go. I learned a lot in the Mimoune and Beltran fights and it showed me I can compete at world level and the progression in my performances was visible. I haven’t got miles on the clock, and the miles I do have are smart ones. I’m ready for whatever 2023 throws at me starting on ProBox TV on January 25.”

Brooklyn’s Rainman’s first task of 2023 comes in the form of Mexican Jesus Saracho. Francis discussed his adversary on January 25.

The undefeated 140-pounder said, “I don’t know too much about Saracho, but I know he’s a game Mexican, and we will prepare accordingly in a professional way like we always do. I’m happy the fights are on a Wednesday night because everyone can watch it, it doesn’t clash with anything else so I hope that all eyes will be on ProBox TV watching me show why I’m ready for those big names like Arnold Barboza. Liam Paro, Jose Ramirez, and hopefully this year Josh Taylor.

“I have to do a job on January 25, and show everybody that I’m the darkhorse in the 140-pound division. I’m ranked number 8 by the WBO and I’m grateful to the WBO for ranking me that highly, but don’t miss this next fight, because I’m going to show everybody that I have the capability to become world champion in 2023.”