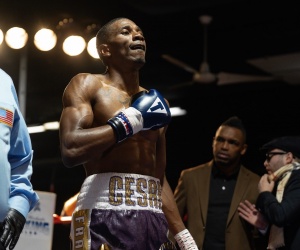 Francis entered the fight as an underdog, but showed his skill levels from the outset, bossing the vast majority of the contest, with the judges scorecards being reflective of Francis’ dominance.

Francis, who nearly forced a stoppage midway through the fight, discussed his performance in front of his hometown crowd in Brooklyn.

He said, “Firstly I have to thank God for the victory, without God we don’t have anything in life. I’m blessed right now, beyond belief, and I am so grateful for that.

“I have to thank my team, Fransisco Guzman, Mitchell Graham and ProBox Promotions, DiBella Entertainment and Triller for giving me the opportunity to be in a competitive fight in Brooklyn, New York. This is what boxing is all about for me. Like I said before, I’m blessed. I have an amazing family and friends that support me and I couldn’t be happier right now.

“I thought I put on a good performance, but I know I have improvements to make and I will get back in the gym my team we will make them. I believe though I announced myself into the welterweight division on Saturday night. I can make 140 still as well, but I’m coming for real fights like I did on Saturday night.”

After taking the scalp of previously undefeated Roman, who entered the fight as a favorite, Brooklyn’s ‘Rainman’ opened up on his objectives moving forward.

Francis stated, “Look I’m really a 140 pounder, I can make 140 comfortably and I want big fights at 140. I’ve just beaten a good prospect at 147, so I have options. Right now though, I want the realest fights. I’m 9-0, but I’m not looking to be spoon fed. I want the tough opposition so I can show what level I am on.

“I have a great team that worked very hard for me to get this last opportunity and prepare me for it, and I know they’ll continue to do that moving forward. I trust them to make the right decision for me, but I’m open to boxing the elite level guys, and pushing on to title fights. That’s what I want next at either 140 or 147.”