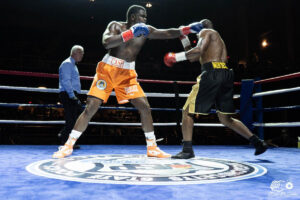 “This was our first show since June 2019 and I’m very pleased,” RPE promoter Jose Antonio Rivera commented. “We had a good crowd, close to a sell-out, about 1800. We had the opportunity to support a lot of local fighters. We had some good fights. I’d like to do one more show later this year.”

Chaney, fighting out of New London (CT), was a standout college basketball player at the University of New Haven. Neither fighter was hurt during the fight, although three consecutive rights from Chaney in the third round did buzz Winters. 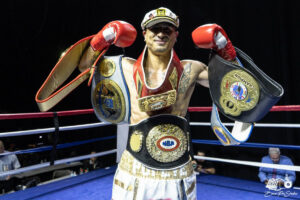 Wildly popular Hartford fighter Richie “Popeye The Sailor” Rivera, promoted by Star Boxing, rolled to his 20th career victory without a loss, stopping Ernesto “Gatti” Berrospe Rivas (11-18, 6 KOs). All it took was one powerful right to the Mexican’s body, which came at the 2:16 mark of round one. The powerful Rivera, who is a former UBF light heavyweight and ABF Continental Americas cruiserweight champion, added the vacant NBA Intercontinental cruiserweight strap to the collection.

“I’m going to be world champion,” the charismatic Hartford fighter said after the fight. “I want Badou Jack next.”

Richie “Popeye The Sailor Man” Rivera was once again good to the finish.

Puerto Rico Olympian Enrique Collazo (16-1-1, 11 KOs) registered knockdowns in the third and fourth rounds, the latter from a vicious body shot that hurt Colombian Ronald Montes (18-14, 16 KOs) so severely he was able to continue in round five. Collazo was crowned the NBA Intercontinental super middleweight title holder.

Puerto Rico-native Wilfredo “El Sucaro” Pagan (6-1-1, 3 KOs), fighting out of nearby Southbridge (MA), and Bridgeport’s (CT) Carlos Marrera, III (2-6-2) fought to an entertaining 6-round draw in their battle for the vacant New England Junior Welterweight Championship.  The momentum moved from one fighter to the other in each round in what was the Fight of the Night. 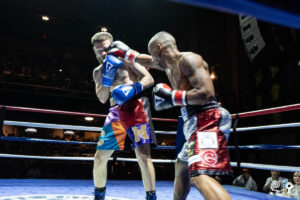 Hometown favorite Demek “Hightower” Edmunds (3-0, 2 KOs), a 3-time New England Golden Gloves champion, was tested for the first time by Brazilian heavyweight Rafael De Souza (0-2). The final score (40-36 X 3) was not indicative of the competition, in which Edmunds pitched a shutout, but De Souza held his own for two rounds until college graduate Edmunds took total command in the third and fourth rounds.