Chantelle Cameron: I Feel Good Being The Target 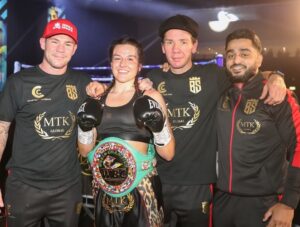 Chantelle Cameron is enjoying being the hunted rather than the hunter as she prepares to defend her WBC super-lightweight title against Melissa Hernandez next week.

Cameron (13-0, 7 KOs) puts her belt on the line against Hernandez (23-7-3, 7 KOs) at the Michelob ULTRA Arena at Mandalay Bay in Las Vegas on May 29, on the undercard of Devin Haney’s WBC lightweight title fight against Jorge Linares, and will be broadcast worldwide on DAZN.

It sees Cameron make the first defence of her title, and after a career of having to chase the big fights, she’s excited to now be the one everybody is targeting.

Cameron said: “I feel good being the target. It’s better than doing the chasing, that’s frustrating, you are just trying to get the fights and a title shot, so now I know I am going to get fights because people want my belt.

“Being world champion has not really sunk in yet, and nothing has changed because it’s been so long since I won the fight, and I haven’t been able to defend it yet.

“I don’t think it’ll really feel it will sink in until I win more belts, but I still feel the same, still have the same drive, the same hunger, and now I am a target. I used to have to chase people for fights but now I have the green and gold belt, I am the target.

“The best of me is yet to come, the fight hasn’t come where I get to show that. I boxed to my game plan to win the belt and did what I had to do and what my coaches told me. She is a big puncher so I knew I didn’t want to be taking risks and getting involved with someone that could put me on my backside. When I do get the fight that shows what I can really do, I think people will acknowledge me more.

“Everyone is so desperate to stay undefeated, but this is a sport, we all have to climb the ladder and if you are that good, then boxing anyone – that’s my mentality. If I become undisputed and someone is calling me out and they’ve proved themselves, let’s take the fight.”