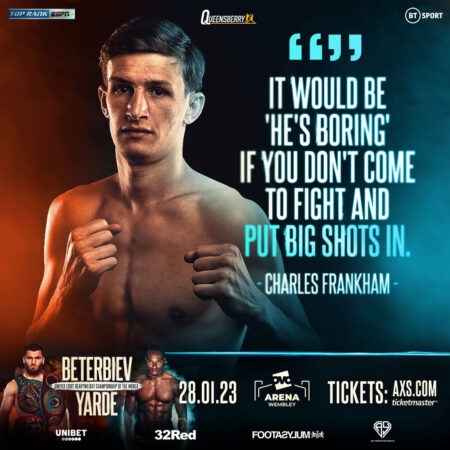 Former amateur superstar Charles Frankham revealed that he is in the process of adding power to his array of attributes as he seeks to make himself noticed in the professional ranks.

Frankham will next feature on January 28 at the OVO Arena, Wembley on the undercard of the blockbuster world light heavyweight title collision between the unified champion Artur Beterbiev and Anthony Yarde.

Now 6-0 and with a glittering amateur career behind him, the 23-year-old knows he could utilise his skills from the vested code and quick-step his way to success without taking much by way of punishment.

But Frankham is keen to move away from the tip-tap and move style that served him so well in his youth and wants to start putting some meat into his shots.

“It would be ‘he’s boring’ if you don’t come to fight and put big shots in,” reasoned the Crowthorne man known as ‘Boom Boom’. “Mayweather got more technical later in his career and everybody said he was boring. People need to be excited to see you.”

Since teaming up with trainer Roger Lee, Frankham’s punch output has featured some noticeable venom and his shots are starting to sting, as his last opponent Sandeep Singh Bhatti will testify to.

Singh Bhatti is much more than simply prospect fodder, he comes to win and always makes a fight of it. Frankham rose to the challenge and passed with flying colours.

“We knew he would come and we knew he would be game all the way through the fight. He doesn’t come to take shots and sit on the ropes. He came to fight instead of just taking punishment.

“Adding some force is what we’ve been working on and creating more power. It is coming now, I am coming into a man’s body now at 23, so I am getting a bit of strength behind me now.

“I feel like I am punching harder and I just need to put it all together now.

“When you are throwing big shots you obviously do risk a lot more and with being inside too, you can get caught.

“You are going into a boxing match so you are gonna get punched anyway!” added Frankham, who also believes boxers need a personality to go with their punch.

“You’ve got to be entertaining and you’ve got to be a face as well. You need to have the skill and ability. Some of these fighters coming in, the YouTubers, are not good boxers but they are making a fortune messing about in the ring.

Tickets for Beterbiev vs. Yarde at the OVO Arena, Wembley on Saturday, 28 January are available from AXS.com and Ticketmaster.co.uk.