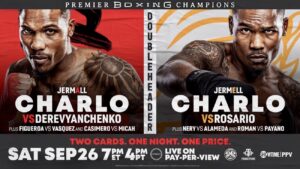 The Showtime six fight lineup pay per view doubleheader on September 26th covers two separate fight cards headlined by one of the Charlo twins, Jermell and Jermall. The retail price being $74.95. The combined event starts at 7:00pm E.T.

The first part will be headlined by WBC middleweight champion Jermall Charlo (30-0, 22 KO’s) against Sergiy Derevyanchenko 13-2, 10 KO’s). Brandon Figueroa against Damien Vázquez in the co-featured bout, while John Riel Casimero goes against Duke Micah in the pay-per-view opener.