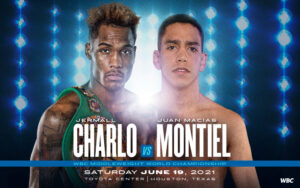 The World Boxing Council has created a special, Freedom Belt to commemorate Juneteenth Day, which emancipated slavery in the State of Texas.

It will be presented to the winner of the bout between WBC middleweight champion Jermall Charlo vs. Juan Macias Montiel on June 19th at the Toyota Center, Houston, presented by TGB Promotions and PBC, Live on Showtime.

Juneteenth is annually celebrated as a holiday on June 19th throughout the United States.

This emancipation proclamation originated, due to the announcement of General Order number three, by Union Army General Gordon Granger, on June 19th 1865, applying to the State of Texas.

The original overall architect of Emancipation was President Abraham Lincoln. It was enacted by the thirteenth Amendment to the Constitution proclaimed by the US Senate on April 18th1864, followed by the House of Representatives on January 31st1865, and the States themselves on December 6th of that same year.

Officially slavery was abolished, but racial prejudice and its odious instrument of segregation remained to be defeated. The long, painful and ultimately successful pacifist campaign was led by Dr Martin Luther King, lasted well into the twentieth century. Dr King who won the Nobel Peace Prize, was assassinated on April 4th 1968 in Memphis, Tennessee.

The World Boxing Council Family spans one hundred and seventy nations Worldwide, irrespective of race, color and creed. The winners of the cherished Green and Gold Belt are lauded for their magnificent dedication and wonderful achievements. That is our definition, and it remains our Gold Standard.

In New York City, the WBC will have an outdoor celebration sponsored by WBC Cares and Gleason’s Gym. Here, under the Dumbo Extension, Grammy Award winning musician, NabateIsle’s will play when a replica of this magnificent WBC Freedom Belt is presented to the Eagle Academy for Young Men of Harlem, by Borough President, Eric Adams. The festival will also be commemorating the 40th anniversary of Boxer’s Day, in honor of Joe Louis.

The Juneteenth Freedom Belt, is part of the historic celebration for fundamental rights of Emancipation underlining the fact that all children, women and men are born equal. It is epitomized by the famous quote of journalist Jimmy Cannon about Joe Louis, which said: “Joe is a credit to his race…The Human Race!”

Heavyweight Andrey Fedosov ready for heavyweight elite The fruits of the WBA’s “Boxing is One” in Aguascalientes, Mexico