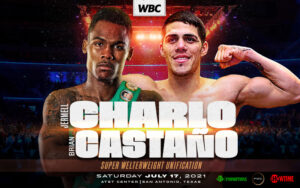 This weekend, boxing fans will be treated to a potent, potential Fight of the Year, when Jermell Charlo and Brian Castaño duke it out, for the undisputed super welterweight championship.

A contest where a new undisputed champion will be crowned, adds spice and pepper, to the sizzling stakes. Those special ingredients add to the relish, which so motivates the contenders to go one step further, dig even deeper and fight all the harder, in order to achieve the undeniable enviable status of the very best fighter right across the board in this division.

Also, the potential of reaching the Top Five in the best Pound for Pound List.  This all involves a lifetime of accumulated skills, unwavering self-belief and the sheer nerve to take calculated, but none the less enormous risks, so as to be able to seize the glittering prize.  At the end of this supreme contest, only one will have won.

He is guided by one of the best current coaches, Derrick James. Jermell shares a gym with the reigning World Boxing Council and IBF welterweight champion Errol Spence Jr. They both have a specific plan, strategy and agenda. It involves making history.

More than 50% of Jermell`s victories have come by way of KO. He was defeated by Tony Harrison in a very close fight; however, he managed to win back the crown a year later via KO.

He has faced and defeated the good and the great, including: Jeison Rosario, Tony Harrison, Jorge Cota, Vanes Martirosyan, Erickson Lubin, Charles Hatley and Gabriel Rosado.

Jermell Charlo has always been characterized by his ability and confidence. The very essence of self- belief.  He has a considerable height advantage, he has performed brilliantly in his last appearances, he continues learning and improving.  In spite of the fact that he does not usually give predictions, he is cast iron certain in his own mind,  that he will be able to defeat Brian Castaño to become the first undisputed super welterweight champion. Mind over matter surety.

Brian is not unfazed about fighting outside his country and is always ready to face the best available opponents. He comes from starring one of the finest fights of this year, when in February he dethroned tall, skilful, rangy and resilient world champion Patrick Texeira of Brazil,  by unanimous decision.

He is considered underdog by various boxing analysts due to his “lack” of experience; however, as amateur boxer he managed to defeat Errol Spence Jr., Sergiy Derevyanchenko and Esquiva Falcao.

Like all the Argentinians, passion courses through his veins and although we are talking about different sports, Brian has declared that he is highly motivated by the recent victory of Argentina in the soccer Copa América and he desires to increase that pride and joy of his compatriots by becoming undisputed champion this Saturday. It takes two to tango, but it takes one to win.

The Boxing World awaits with bated breath, on the edge of its seats for this Undisputed Thriller. Both fighters are at their peak zenith, so we`re going to see a fight to remember!