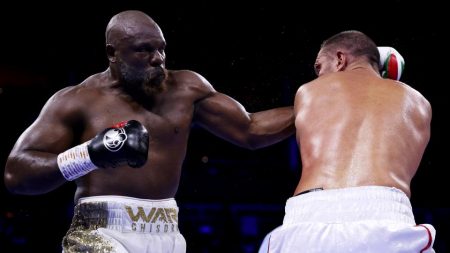 Derek Chisora and Kubrat Pulev stepped into the ring as two heavyweight veterans and there was a lot of uncertainty about what kind of fight they were going to give the audience. However, those doubts were dispelled after they put on a great fight, which ended with a split decision victory for Chisora, who is the new WBA International champion.

Although they were not quite on target with their punches and there were hugs in several parts of the fight, each had their moments in which they managed to move the other to get the crowd off their chairs.

In the end, Chisora got revenge for 2016, when he lost to Pulev in a close fight, something similar to what happened this weekend in London.

The Englishman leaves his record at 33 wins, 12 losses and 23 knockouts. Pulev leaves 29 wins, 3 losses and 14 knockouts.

An unfortunate accidental third round head clash that resulted in a cut on the face of Frenchman Michel Soro caused his bout with Israil Madrimov to end in a technical draw.

The expected rematch between the Uzbek and the Welshman did not go as expected for the WBA super welterweight eliminator fight.

Madrimov, who came out with an aggressive style, was in front at all times and put his opponent against the ropes several times, dominated the fight. However, it was still very early in the fight.

After the fight, Madrimov’s record stands at 8 wins, no losses, 1 draw and 6 knockouts. Soro, on the other hand, now has a record of 35 wins, 3 losses, 2 draws and 24 knockouts.

Agyarko fought a very tidy fight, carried the initiative and used his power punches well, especially to the body of the Polish. The Irishman managed to hurt Maciec at times but he had a worthy and tough opponent in front of him.

The Polish fought against the grain and tried to surprise Agyarko with long punches, he showed danger all the time but it was not enough to win the rounds.

Agyarko won a new professional title after dropping from middleweight to super welterweight and now has a record of 12 wins, no losses and 7 knockouts, while Maciec has 28 wins, 5 losses, 2 draws and 5 knockouts.