Chris Billam-Smith returns to Battle In Bournemouth on Dec. 17 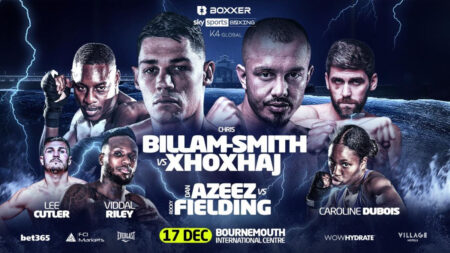 Get ready for an early Christmas gift as cruiserweight hero Chris Billam-Smith comes back to town to headline a cracking BOXXER card at the Bournemouth International Arena on Saturday, December 17th – live and exclusive in the UK & Ireland on Sky Sports.

‘The Gentleman’ celebrated a unanimous points victory over Isaac Chamberlain in a destructive display back in the summer.

And the former Commonwealth king (16-1-0, 11 KOs) is ready to raise the roof again and take a giant leap towards a world title shot in 2023 when he takes on dangerous Albanian fighter Armend Xhoxhaj (14-2-0, 7 KOs).

The 28-year-old – known as ‘The Bombardier’ – defeated Roman Fress back in May to claim the WBO Inter-Continental Cruiserweight title and will head to the South Coast looking to celebrate another major upset.

Azeez displayed his class in September when he outshone Shakan Pitters on Merseyside. But the Londoner faces arguably the toughest test of his career to date as he looks to protect his flawless record against Liverpool’s Fielding – whose only-ever defeats have come against Canelo Alvarez and Callum Smith.

‘Sweet’ Caroline Dubois (4-0, 3 KOs) made history in October when she knocked out Milena Koleva in front of a sold-out crowd at The O2 in London – watched by a record-breaking two million viewers on Sky Sports.

The 21-year-old lightweight prodigy has her heart set on winning world titles and she completes an unforgettable 12 months back in Bournemouth – the scene of her stunning summer stoppage over Happy Daudi.

Fresh from his sensational third-round stoppage win over Ross McGuigan in Manchester last weekend, rising cruiserweight star Viddal Riley (7-0, 4 KOs) returns as he looks to close out a phenomenal year with yet another highlight reel performance.

And Bournemouth’s own Lee Cutler (11-1-0, 7 KOs) will be keen to spread some festive cheer for the local fans in attendance.

BOXXER CEO & Founder, Ben Shalom said: “We were blown away by the crowd in Bournemouth earlier this summer and it is great to be heading back there in December.

“Chris Billam-Smith tore the roof of the place in his breathtaking win over Isaac Chamberlain. The noise was deafening and the atmosphere was absolutely electric. I’m expecting the fans to reach a whole new level as CBS continues his march towards a world title shot in what will be a tough fight against Armend Xhoxhaj.

“We have a real treat in store as ‘Super’ Dan Azeez takes on Rocky Fielding. Rocky is a world level fighter, a big name in the UK and the only defeats on his resume are against Canelo Alvarez and Callum Smith.

“With Caroline Dubois and Viddal Riley in action too, this card is an early gift for British boxing fans.”

Chris Billam-Smith added: “I can’t wait to get back to Bournemouth in front of the best atmosphere in the country.

“Last time out was nothing short of incredible: the fight itself, the atmosphere, the occasion. This is the last step before the world title. I will put on a world class performance worthy of that chance and the phenomenal support.”

Full card to be shared later this week. Registration for pre-sale tickets is open now at Boxxer.com.

A change is as good as a rest for Dempsey Madden, returns Nov.18 Sheffield’s next big star Keanen Wainwright gets first title fight