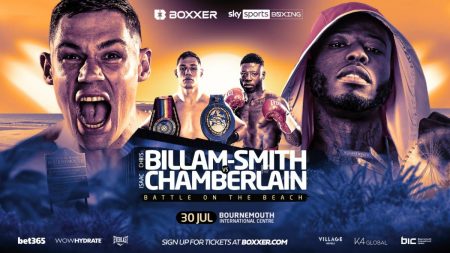 The summer just got hotter with Chris Billam-Smith facing top contender Isaac Chamberlain in a sizzling domestic showdown on Saturday 30th July at the Bournemouth International Centre, live and exclusive on Sky Sports.

Bournemouth star Billam-Smith (15-1-0, 11) faces flash Londoner Chamberlain (14-1-0, 8)  in a real 50-50, hard-to-call, clash that pits the third and fourth independently ranked British cruiserweight fighters against each other at the famous seaside venue.

With the highly competitive domestic 200lb division at its strongest in recent years, the winner can look forward to more big showdowns against British rivals, including in the BOXXER stable Richard Riakporhe, Michael Lawal and the fast emerging Viddal Riley.

Fighting under the alias ‘The Gentleman’, the 6’ 3” big-hitting Billam-Smith is anything but with 11 KO’s in 16 fights and has marked himself as one of the major threats in the division.

He captured the British and Commonwealth titles with a points decision over Tommy McCarthy in July 2021 and defeated him again in brutal style in April this year to win the European and Commonwealth belts with an eighth round KO.

A victory against Chamberlain could lead to a future blockbuster rematch against World class Riakporhe, who is the only man to hold a victory over Billiam-Smith in July 2019.

Similarly, Brixton puncher Chamberlain is in a dynamite run of form with four blistering back-to-back KO’s – the last three coming inside the first round.

In his last fight against Dilan Prasovic in December 2021, Chamberlain captured the IBF International Cruiserweight title after dropping the tough Montenegrin with a hard left hook to the body and he failed to make the ten-count.

‘I C’ will be going all out for victory against Billam-Smith as he hunts down a rematch with his only conqueror, the current WBO World Champion Lawrence Okolie, who defeated him on points in February 2018.

Billam-Smith said, “I’m coming home! I’m so delighted to be fighting back at home in front of my friends, family and supporters. Atmosphere is why I got into boxing and on 30th July the atmosphere is going to be electrifying.  As I always said, it doesn’t matter who is in the other corner, I just want to fight back at home. In front of my home crowd, I always perform.”

Chamberlain said, “This is a massive opportunity and I want to give a huge shout to my manager Mick Hennessey for sticking with me all these years, along with my trainers. Now we’re on Sky, we’re back in the big time and I’m ready to show everyone this is a different Isaac to the one they’ve seen before.”

BOXXER CEO and Founder Ben Shalom, added, “This is an evenly matched showdown between two of the best and highly ranked British cruiserweights.  Everything is on the line so we’re sure to see fireworks. Billam-Smith will be riding high in confidence in front of his frenetic Bournemouth fans, whilst Chamberlain is fired up to cause a major upset and beat Billam-Smith in his own backyard.”

Adam Smith, Head of Boxing Development for Sky Sports, said, “We are very excited about a super summer show in Bournemouth topped by the fabulous cruiserweight clash between two of our very finest in Chris Billam-Smith and Isaac Chamberlain.  There will also be a golden chance to showcase our wonderful next generation of Boxxer/Sky talent at peak time on Sky Sports on this bright, lively Fight Night at the end of July! More details to follow soon.”

A full undercard will be announced shortly.

Be first in line and make big savings with exclusive ticket discounts – join the pre-sale waiting list at Boxxer.com now!