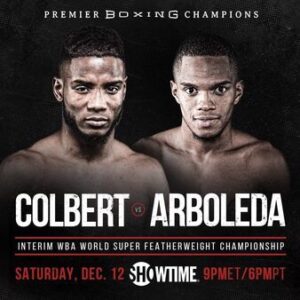 “I dominated the whole fight,” said Colbert. “I probably gave him two rounds, but that was by choice. I just wanted to build his confidence because I knew I was going to stop him in the later rounds. I came to show the 130-pound division that I can punch. I’m here and I’m here to stay.

“I’m more than just a flashy boxer. I can stand in there and bang. I know there were close rounds in the fight, but I understood that as it was happening. It was part of the game plan. I knew what I was doing. I was wearing him down to knock him out late. I did what I said I’d do.”

Fight Notes: The scores were 98-92, 99-91 (for Hitchins) and 97-93 in favour of Mendez for a split decision win for Hitchins. Bout made at super lightweight.

Fight Notes: WBC #9 Korobov suffered a leg injury in round 4 and didn’t come out for round 5 for a WBA #11 Ellis win. Bout made at middleweight.

Fight Notes: Bout made at featherweight.