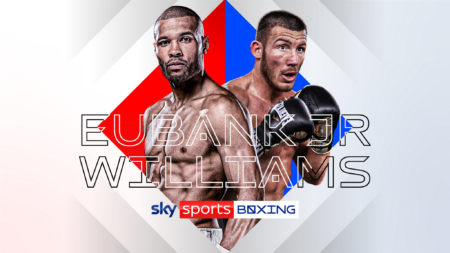 Cardiff, Wales (November 11, 2021) The long-running rivalry between Chris Eubank Jr and Liam Williams will be settled in explosive fashion on Saturday, December 11 in a highly-anticipated showdown promoted by BOXXER and Wasserman Boxing at the Motorpoint Arena Cardiff, live and exclusive on Sky Sports.

Eubank (31-2, 23 KO’s) and Williams (23-3, 18 KO’s) both lay claim to being the #1 middleweight in the UK and have traded verbal jabs numerous times in recent years. Now Eubank is taking the fight to Williams’ doorstep as he heads to the Welsh capital city of Cardiff to face the Welshman on home soil.

With both fighters known for having all-action styles and a proven pedigree for finishing fights inside the distance, their December 11 meeting promises to be one of the most electrifying British boxing contests of the year in a fiery England-Wales showdown.

“Liam Williams has been saying a lot to try to catch my attention and bait me into fighting him,” said Eubank Jr. “It’s now got to the point where everyone is asking me to shut him up, and on December 11, I’m going to give the people what they want.

“As I’ve said, I’m only involved in big fights from now on and this is the fight people want to see. They want to see if Williams can back up what he’s been saying – which he won’t. I’m on a mission towards World Titles and Liam Williams is someone I’ve got to go through to get there. I’m looking forward to shutting him up.”

Williams said, “I’m very excited to get the fight made. It’s been coming for a long time. I can’t wait to shut his mouth once and for all. There’s nothing like a big domestic showdown to get the juices flowing. A lot of people have been calling for this fight for a long time. I personally think it’s the biggest all-British fight outside of AJ and Fury.

“I’m really excited and just counting down the days. I’ve not been that impressed with Chris’ recent performances. People are talking about how he’s brought Roy Jones in to improve him but if I’m being totally honest I don’t think he’s improved one bit. A win in this fight and possibly even a stoppage over Eubank and my name is going to be well and truly out there and in the mix for world titles.”

“This fight has everything and has been what all the fans have been asking for. It’s an amazing way to end the year for Boxxer on Sky Sports and bringing this type of fight as part of a normal Sky Sports subscription is a very proud moment,” said Ben Shalom, BOXXER founder and CEO.

“They genuinely dislike each other, they both come forward non-stop and Eubank is heading into the dragon’s den to settle their issue on Williams’ home soil. I’ll be amazed if this doesn’t turn out to be British boxing’s fight of the year. A stacked card will sit underneath – Cardiff is in for a very special night.

“We’re also extremely excited to have concluded a multi-fight deal with Claressa Shields and her promoter Dmitriy Salita. She’s widely considered the most feared female in boxing and British fans will have their first chance to see her in action live on December 11 as she takes on the dangerous and undefeated Ema Kozin in a unified world title fight.”

“With their heated feud ready to boil over, Williams will relish the chance to inflict a crushing defeat. Is Eubank Jr ready for the biggest names in the world? We’ll soon find out as Sky Sports serves up a festive treat!”

“This is the fight that everyone has been talking about,” said Wasserman Boxing promoter Kalle Sauerland. “The public demand has been overwhelming. On December 11, Chris Eubank Jr and Liam Williams are finally going to meet in the centre of the ring to settle their differences once and for all. This is without a doubt the biggest fight in British boxing right now.”

The Wasserman Boxing-promoted Eubank fought in Newcastle last month, stopping German challenger Wanik Awdijan with a body shot in the fifth round of their contest. It was Eubank’s second fight and win of the year, following his dominant win over Marcus Morrison in May.

Williams last fought in April this year, when he rode a seven-fight streak of stoppage wins into a world title challenge against WBO Middleweight Champion Demetrius Andrade in Florida. Williams brought the fight to the undefeated defending champion and forced Andrade to dig deep to retain his title by way of judges’ decision.

Also confirmed for the December 11 card is two-time Olympic gold medallist Claressa Shields, making her first appearance in the BOXXER ring as part of a seven-figure deal struck between BOXXER, Sky Sports and her management at Salita Promotions.

WBO Women’s World Middleweight Champion Savannah “The Silent Assassin” Marshall will next compete on BOXXER’s first card of the new year, scheduled for February 2022, as she rehabilitates a hand injury sustained in her second-round stoppage of the previously undefeated Lolita Muzeya last month.

Tickets will go on sale to the general public tomorrow, Friday November 12 and the two fighters will be present at a press conference in London next week, with details of the conference date and time to be announced shortly.