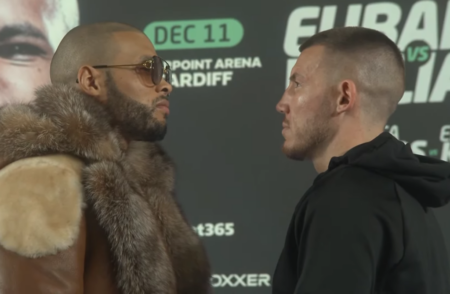 Liam Williams and Chris Eubank Jnr both traded words as they met at their press conference ahead of next month’s highly-anticipated battle.

The two men will collide on an event at the Motorpoint Arena in Cardiff on December 11 put together by Wasserman Boxing and Boxxer, and will be broadcast live on Sky Sports.

They went head to head at the launch press conference on Wednesday, and things got heated between the pair ahead of their showdown.

Williams said: “It’s amazing to bring this fight back to Wales. So many people have been talking about it for a long time. Everybody is buzzing, and nobody is more excited than me. What more can I ask for, I just need to turn up and deliver.

“This is massive for me. I’m coming off a loss to Andrade in a world title fight, and there’s no shame in that. I’m gutted I lost, but I need to win this fight to get myself back in a position where I can fight for another world title.

“I have just Chris standing in my way, and I’ll go through him and deal with him and then we’ll move onto the next one. I’ve got a lot of respect for him as a fighter. He’s tough and durable and in fantastic shape.

“He comes to have a good fight, but he’s just another opponent to me. I want to punch his head in and move forward. I don’t have respect for him as a person. I don’t like how he goes about his business, and he is not somebody I would want to be friends with.

“I’ve said a few things to him online, but I have no regrets. Whatever I’ve said I’ve said, and if he doesn’t like it who cares. He’s had to come to Cardiff because he doesn’t sell a ticket and has no friends.

“The Welsh fans will be hostile for him. They’re very passionate, and are amazing people, and they’re not going to be the most welcoming for him. I’m sure he’ll thrive off it just like I would. I like fighting away from home, as it gives you the extra nerves and puts you on edge.

“He’ll react to the situation well as I think he’s mentally strong, so we’ll see. It won’t make a difference, we’re both there to do a job, and the best man will win on the night. We’ve got a game plan in place and we all know what his strengths and weaknesses are.”

Eubank said: “Respect is not a word I would use in my feelings towards Liam. He’s said a lot of reckless things online, and it doesn’t sit well with me at all. This is a grudge match and a genuine domestic rivalry, it’s personal with the things he’s said.

“He’s come here today and tried to talk about respect and say these things, but it’s gone too far past that now. He’s going to pay for what he’s said. He’ll get embarrassed and get hurt. He’ll eat his words soon enough.

“The fans wanted the fight. I don’t care about Williams and he doesn’t bring anything to the table apart from a big mouth. I like to please the fans and it will be a fun fight for them.

“The styles we both have will gel very well, but he doesn’t has what it takes to stop what I’m going to do. Eventually I’ll get to him, and I think he’ll quit or get knocked out.”