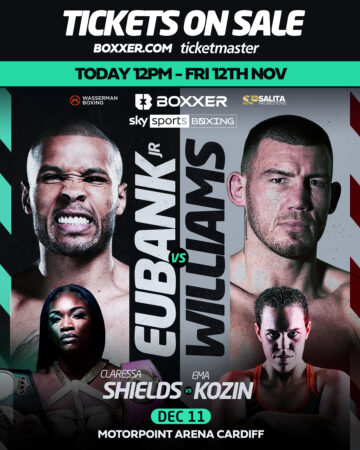 Motorpoint Arena, Cardiff 11/12/21
Tickets for the British boxing’s biggest domestic fight of the year go on sale today at 12 pm midday via Ticketmaster and Boxxer.com

Chris Eubank Jr (31-2, 23 KO’s) and Liam Williams (23-3, 18 KO’s) will collide at the Motorpoint Arena Cardiff on Saturday, December 11 in a main event fight British boxing fans have been clamouring for and tickets are expected to sell out quickly.

With both fighters known for having all-action styles and a proven pedigree for finishing fights inside the distance, their December 11 meeting promises to be one of the most electrifying British boxing contests of the year in a fiery England-Wales showdown.

“Liam Williams has been saying a lot to try to catch my attention and bait me into fighting him. It’s now got to the point where everyone is asking me to shut him up, and on December 11, I’m going to give the people what they want,’ said Eubank Jr.

Williams said, “I’m very excited to get the fight made. It’s been coming for a long time. I can’t wait to shut his mouth once and for all. I personally think it’s the biggest all-British fight outside of AJ and Fury. [I’m going for] a win in this fight and possibly even a stoppage over Eubank.”

Further bouts for this can’t-miss card will be announced in the coming days.

TICKETS FOR THIS YEAR-ENDING LANDMARK CARD GO ON SALE TODAY, FRIDAY NOVEMBER 12, AT 12 PM MIDDAY VIA TICKETMASTER AND BOXXER.COM