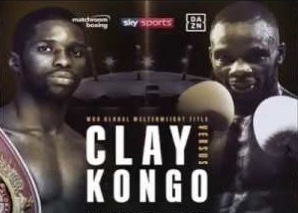 On the undercard of Dillian Whyte vs Alexander Povetkin is a fascinating match between Chris Kongo (11-0, 6 KO’s) against Luther Clay (13-1, 5 KO’s) for the WBO global welterweight title.

“I took the fight straight away,” said Kongo. “I didn’t even have to think about it. I’ve been waiting for the opportunity and it’s here now, so I’m going to take it with both hands. It has been a long time coming. I’ve come up the hard way in the sport of boxing and there’s fire in my belly. I’m going to rip the belt from him. I’m not taking any chances. I’m not leaving it to the judges. We’re going to rip the belt off the champion. Guaranteed.

“I believe I’m coming to take the title regardless of what Luther does. I believe this is my time. When it is someone’s time, it doesn’t matter what happens, you can’t stop it. I believe this is the moment Chris Kongo is going to be announced as one of the top Welterweights in the division. I need to prove that I am the number one Welterweight in the country. I know my level. That’s why I believe I can be at the top table.

“He’s going to try and bring the pressure because he thinks I’ll be rusty due to my time out of the ring. They’re going to be in for a big shock. They will try to put pressure on me and wait until the later rounds. It’s probably the worst thing they can do. We all know what kind of shape Jim McDonnell is going to have me in.

“We know he’s not going to try and out skill me or outbox me because he can’t do that. His greatest attributes are always coming from the front foot. If he wants to bring the pressure, trust me, we’re going to meet head on. I’m a big Welterweight. I’ll be ready for that.”