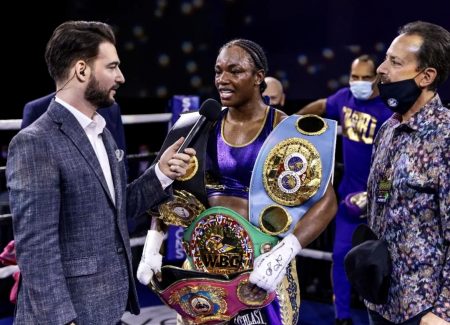 The four-fight pay-per-view telecast will begin at 3 p.m. ET/12 p.m. PT with Shields vs. Kozin serving as the co-main event to the highly-anticipated headliner between middleweight contenders Chris Eubank Jr. and Liam Williams.

Guided by Salita Promotions, Shields signed a lucrative multi-fight deal with promoter Boxxer and broadcaster SKY Sports in the U.K. that has put her on the path toward a superfight showdown with WBO Middleweight Champion Savannah Marshall in 2022.

Marshall owns an amateur victory over Shields, the only boxing defeat she has ever suffered in the amateur or pro ranks. Shields must emerge victorious on February 5 to clinch her long-awaited revenge match against Marshall.

“I’m eager to get back in the ring and I can’t wait to return to boxing on February 5 in the U.K.,” said Shields, who is training in her hometown of Flint, Michigan with her coach John David Jackson.

“We’ve been pushing through the delays so that I’m 100% ready to display my skills against Ema Kozin. I’m going to give her a beating that’s going to make Savannah Marshall regret agreeing to face me. This is going to be a performance you’re not going to want to miss.”

The 26-year-old Shields defeated the previously unbeaten and then IBF World Super Welterweight Champion Marie-Eve Dicaire in March of last year to make history and become the first boxer in the four-belt era to be an undisputed world champion in two weight classes. Shields has made history throughout her boxing life, as she is also the only fighter in U.S. Olympic boxing history to win two gold medals with wins in London in 2012 and Rio in 2016.

The pay-per-view can be purchased through the recently-launched PPV.com streaming platform from iNDEMAND, FITE.TV and will be carried in North America across all cable, satellite and telco PPV platforms. On TV, boxing fans can order the event through Xfinity, Spectrum, Contour, Fios, and Optimum, among others (U.S.), as well as leading operators in Canada. Complete PPV distribution details can be found below.

**HOW TO WATCH THE February 5 – Claressa Shields vs. Ema Kozin PPV**