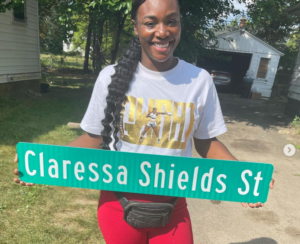 Salita Promotions congratulates fighting superstar Claressa Shields for having the street she grew up on in Flint, Michigan, honorarily dedicated in her name by City of Flint Mayor Sheldon Neely. Last Sunday, Shields, 26, was presented the accolade, which turned Spencer Street into Claressa Shields Street, at her Joy Tabernacle Church, where Shields was a guest speaker.

“Claressa continues to make us all proud while exemplifying what it means to be a true champion,” said Mayor Neely. “She has accomplished so much, remains connected to this community and we just want to honor her. This street dedication is well-deserved.”

Shields (11-0, 2 KOs), a two-time Olympic gold medal winner, three-division professional boxing champion, the first fighter, male or female, to unify championships in two divisions and the fastest boxer in history to win titles in three different weight divisions, says this award is especially touching for her.

“I could not be happier today y’all!” said Shields on Twitter. “I had a great time at church! So thankful to everyone who came out to worship with me today! I was surprised by the Mayor of Flint! The street I grew up on Spencer street is being named after me ‘Claressa Shields Street.’ My grandma would be so PROUD!!!! I delivered a great message today! I feel so special!!! I’m overjoyed.”

“This is a well-deserved honor for a woman and fighter who has done a lot to help and support her home city,” said Shields’ promoter, Dmitriy Salita of Salita Promotions. “She never stops working toward success in her career or as a public figure with an inspiring message. Salita Promotions is proud to represent her.”