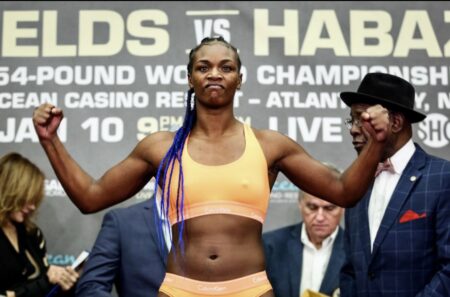 TWO-TIME OLYMPIC GOLD MEDALIST CLARESSA SHIELDS FIGHTS WEDNESDAY, OCTOBER 27 IN 2nd MMA FIGHT Not for Title – Not in One of the The $1M Fights AT SEMINOLE HARD ROCK HOTEL & CASINO LIVE ON ESPN 2, ESPN+ & ESPN app

“In my last fight, she had a background in kickboxing and she also had amateur background in boxing and I thought we were very evenly matched. This fight, I am not taking her lightly.

“I am 1-0 in MMA. I’m not 12-0. She has experience. She has a kickboxing background. I watched her fight and she takes girls down. She’s a ground and pound girl. She throws kicks. She throws punches and combinations and stuff. I have to be very alert for this fight. It is a different kind of fight. I am going for a very competitive fight and she is going to know she was in a fight. I need to not get messed up by her, and mess her up. We are very evenly matched. I’m not taking her lightly and I don’t think she is taking me lightly.

“With the girls I train with, it is very exciting working with them (Holly Holme, Cyborg). I can say, ‘oh I should have done this or I should have done that.’ Instead of watching them and being confused. I’ve been learning on the job and getting better and better. I am being taught arm bars and being taught how to get out of them. I am doing really great at wrestling and learning how to get out of clinches and stuff like that. That stuff used to be confusing now I feel good at it.

“I felt a part of MMA when I made my debut, now I feel a lot more because I know better. I am looking forward to showing the world that I am putting a lot of work in and I am better at Jiu Jitsu and better at wrestling and betting better at being a mixed martial artist overall. I’m just happy that I have a chance to do better. My team and I went back and watched the film and we have a great game plan.

“Well, if I was 30 I wouldn’t be trying MMA. I am 26 so I have a lot of time to learn and I don’t have to rush myself. Next year I can fight in the PFL tourney at 27 and then 28. I think 2023 is the golden year – I will get the chance to get a lot of experience inside the cage and become a great fighter.

“I let the right hand go in boxing just like I do in MMA. I just have to widen my stance a little bit to throw kicks. It’s a little different but fighting is fighting. In order to get a powerful punch you need to twist the boxing and you’ve got to have legs. Others I train with that came from boxing we have to remind ourselves ‘he we still have to use our hands.’

“When I spar with MMA people, they have it up on e with their legs but I have an up on them with my hands. I have great sparring and we all challenge each other and learn from each other. Before my first MMA fight I would forget that I have legs. I was so used to defending myself with my hands in a fight and now I have to use my legs and sometimes I feel like my legs aren’t there and my partners are like ‘OMG, us too.’

“I was great at boxing and made a great career out of it. If I become PFL champion that will be great and I can be champion at both at the same time. I don’t think you can do combat sorts if you just like it – you have to LOVE fighting and if you don’t, you’re not going to last long.

“It takes about a month for me to prepare for a fight. We can look at some tape of my opponent then get ready. My next fight is at 160 and this fight is at 155 so I don’t have to worry about weight. We will look at the girl, game plan and go from there.

“Bare knuckles? I feel like the rules in boxing, the gloves, are put in place for fighters’ safety and head trauma would become a bigger issue.

“I have proven myself over and over and over again and I never fought PPV on Showtime. I fought in a main event and I sold out arenas, but they won’t pay us even as men. We put on great fights that are entertaining – they see us as valuable but not as valuable as the men. Hopefully they will open their eyes.

“Jake Paul? Please. I don’t know what world people live in that think a person that has no boxing background, a man who has not fought professionally, look, there are a lot of women in boxing that can beat up men, especially an average Joe like Jake Paul. If I was to spar Jake, which is all I would get because a real fight would be too embarrassing, right? But if we were to spar, I would use one hand – not even the banger – I’d use my (left) jab and I could out jab and hook and uppercut him and embarrass him. That’s how skilled I am. It’s not a shot at Jake, but he’s not as good a boxer as me. If you are, go to the Olympics and medal. I’ve sparred against those guys too – Olympic Gold Medallists, Silver Medallists – I’ve sparred against all of them. Those guys would destroy Jake just like I would. I box for real – not play stuff – I box for real.”