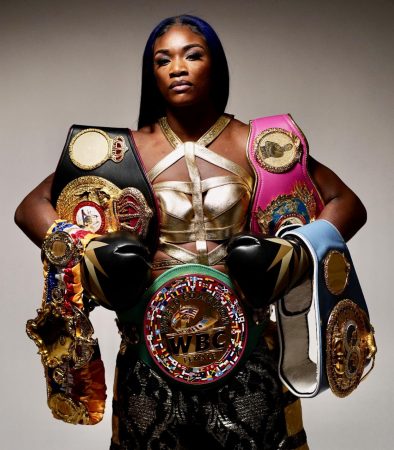 Salita Promotions wishes to congratulate their female superstar Claressa Shields for her inclusion in the 2022 instalment of the Guinness World Records for becoming the first boxer in the four-belt era to hold all titles across two weight divisions simultaneously.

No man or woman in boxing history has achieved this incredible feat.

26-year-old Shields also went an amazing 77-1 as an amateur, winning two world championships and then winning back-to-back Olympic gold medals at the 2012 and 2016 Summer Games. Again, no man or woman in boxing history has achieved this incredible feat.

“Inclusion in Guinness World Records for 2022 is another historical landmark for the greatest female fighter to ever put on gloves,” said her promoter, Dmitriy Salita. “The fact that Claressa has reached this incredible milestone in just 11 fights shows what a truly great fighter she is. I am proud to be her promoter for her historic career, unfolding before our eyes.”

Shields, from Flint, Michigan, recently signed a seven figure, multi-fight deal with BOXXER and Sky Sports. She is scheduled to face undefeated Slovenian Ema Kozin (22-0-1, 11 KOs) in the co-main event of the Chris Eubank Jr. vs Liam Williams fight, scheduled for January 2022 at Motorpoint Arena in Cardiff, Wales, with the eventual goal to attempt to avenge her only amateur loss to now fellow professional Savannah Marshall from the UK later this year.

“Claressa has achieved all this so soon,” continued Salita. “Her career is just getting started with several more interesting super fights on the horizon. Congratulations once again to Claressa Shields for all her groundbreaking work to bring women’s boxing to the forefront.”

“I’m thrilled for Claressa and so proud of her for being recognized by Guinness World Records in their 2022 book as the first man or woman to become undisputed world champion in two different weight divisions in the four-belt era,” said Mark Taffet, President of Mark Taffet Media and Manager of Claressa Shields. “Being the only American in history to win back-to-back Olympic gold medals in boxing, having won professional world championships in three weight divisions faster than any man or woman in boxing history, and now adding this honor just amplifies Claressa’s status as the GWOAT – the greatest female boxer in history – and puts her in rarified air after just eleven professional fights. I can’t wait to see what other game-changing accomplishments await her in the future!”