Claressa Shields is the WBA Female Boxer of the Month 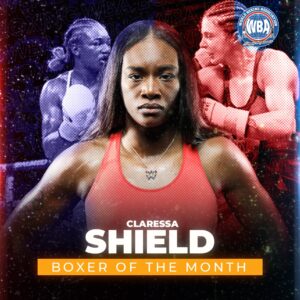 The World Boxing Association (WBA) released its women’s ranking for the month of March and gave out its monthly awards, which went to Claressa Shields as Boxer of the Month and Seniesa Estrada as Honorable Mention.

The Olympic medalist proved to be one of the best fighters of the moment by winning the four belts of the most important bodies in the world at Super Welterweight. The 25-year-old fighter got three 100-90 scorecards to seal a great performance in a fight broadcast on PPV, making her worthy of the distinction.

Meanwhile, Seniesa Estrada defeated Anabel Ortiz on March 20th at the Dickies Arena in Fort Worth, Texas, to become the new WBA Minimumweight champion. The American knocked down the former champion once and won with scores of 100-89, 100-89, and 99-91.

“Super Bad” cut Ortiz’ streak of 11 defenses and beat one of the most dominant champions in recent years to show the talent and grit she has.

The WBA congratulates both of them on their awards and the great wins they earned. The ranking lists and the changes made in the third month of the year can be viewed on the website of the pioneer body.