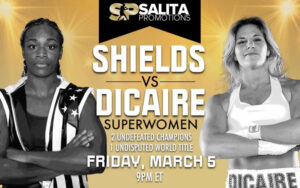 Female boxing dates back to the early eighteenth century in Great Britain, as data reveals that the first/fist  champion on record, was Londoner Elizabeth Wilkinson, who made her debut in 1722.

Other pioneers followed, but It was not until 1975 that some women raised their voices and asked for permission to box in various states of North America, focusing on the trial of boxers Cathy Davis, Jackie Tonawanda and Marian Trimiar who battled against the state of New York for the rejection of their licenses. This then crystalized and focused public attention on the issue and plight of women’s boxing as never before!

However, many experts say that the birth of modern women’s boxing took place on March 15, 1996 with the fight between Christy Martin and Deirdre Gogarty, which despite not being the main event, clearly displayed boxing skills, courage and will of the two fighters which both delighted and impressed the fans.

Women’s boxing is now a established, solid and lasting reality, thanks to the pioneers who`ve time after time, again and again, shone at national, regional and international level. There have been champions who through their dedication and brilliant skills have led the way. Laila Ali, Ina Menzer, Naomi Togashi, Marcela Acuña, Cecilia Braekhus, Laura Serrano, Ana Maria Torres, Mariana Juarez, Jackie Nava, Momo Koseli, not forgetting so many others who have given their all!

The World Boxing Council, led by Don José Sulaimán, began to sanction women’s boxing in 2004, when Mexican Jackie Nava the first WBC  champion. After more than 15 years, the WBC continues championing the fight for women’s boxing to continue growing. The WBC has already held three successful conventions in Playa del Carmen, Tijuana and Manila to encourage and boost development,  promoting  medical research, strengthen the relationship with boxers, coaches, managers and promoters plus address many aspects that have helped progressively grow the sport.

On March 5, from the Dort Financial Center in Flint, Michigan, an historic night of live, all-female pay per-view boxing (9 p.m. ET/6 p.m. PT) celebrating women’s sports and dedicated to International Women’s Day 2021, undefeated three-division world champion Claressa Shields will attempt to become the first boxer in the four-belt era to become an undisputed world champion in two weight divisions when she faces unbeaten IBF Super Welterweight Champion Marie-Eve Dicaire in a 154-pound unification bout between the #1 and #2 super welterweights in the world.

Presented by Salita Promotions in association with Groupe Yvon Michel, the pay-per-view telecast will be available at a suggested retail price of just $29.95 and will be distributed by InDemand to all major cable, satellite and telco outlets and livestreamed by FITE TV through the www.FITE.tv portal. ‘SUPERWOMEN’ will be held on.

On This Day: 42-1 Buster Douglas Shocked Mike Tyson… and the World Andy Ruiz Shows Physical Transformation & Awaits His Return to the Ring